Gate valves are some of the most common valves currently employed. Other common types include the plug, butterfly, ball and globe type valves. 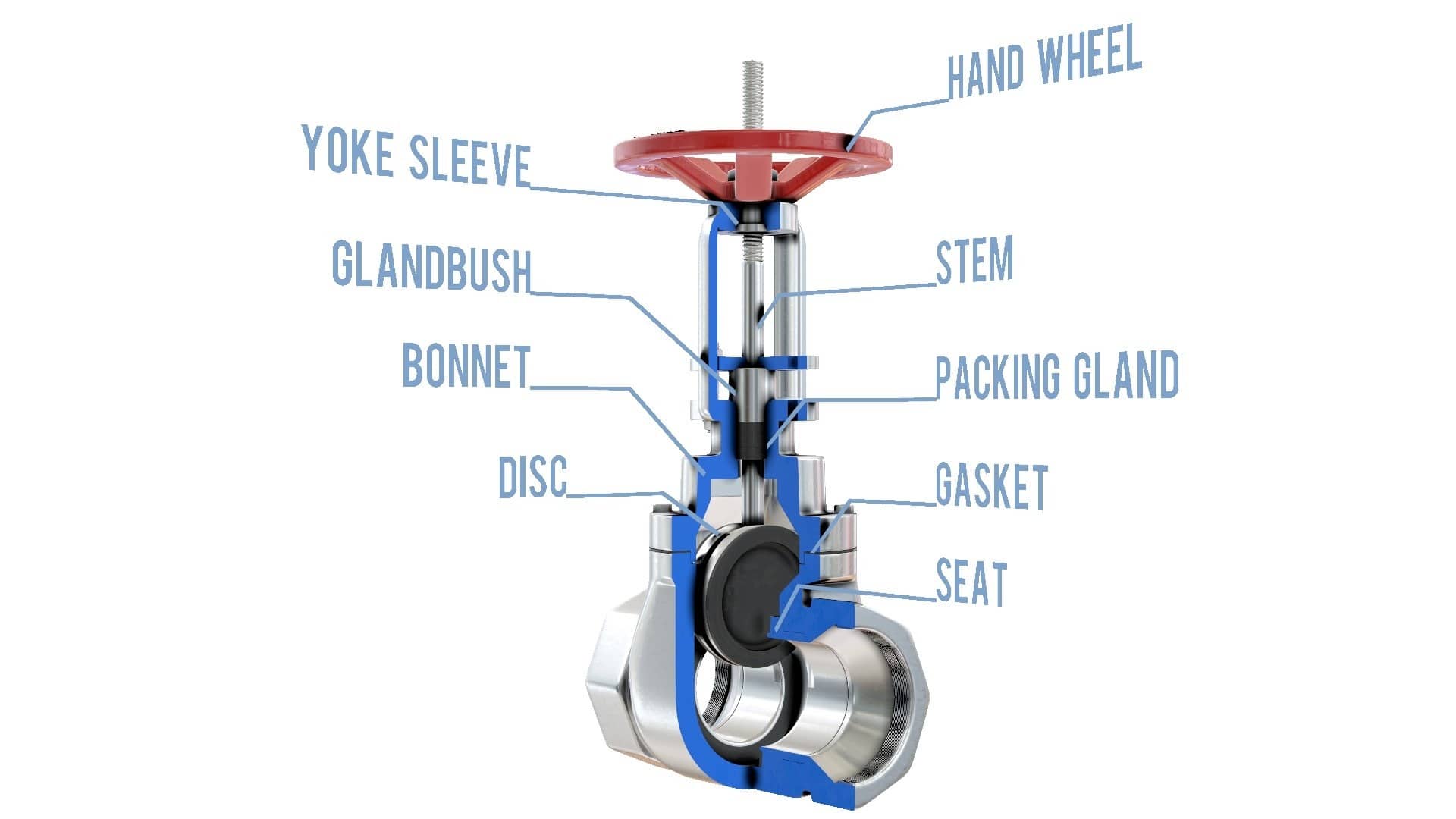 Gate valves offer almost no resistance to flow when they are in the open position; consequently, the pressure differential across the valve is very low when the valve is open.

Like most valves, the gate valve is named after the disc it employs.

Gate valves are always linear motion valves and not rotary motion i.e. they require more than a ¼ turn in order to move from the open to closed position.

As with other valve designs, the gate valve design can be split into several sub-categories. The first category is based upon the disc shape, which is either wedge or parallel shaped. The second category is for either rising, or non-rising stem designs. Other categorisations are based upon the type of disc used: 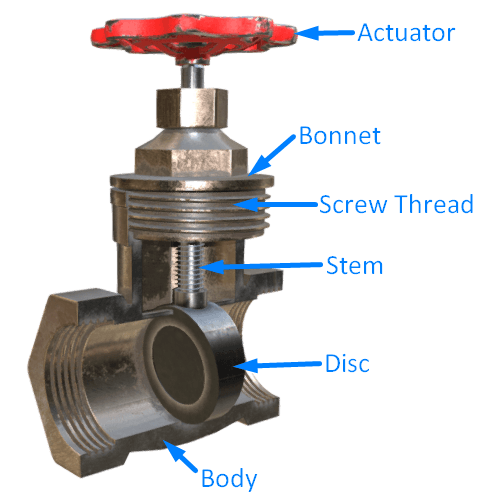 The sliding gate (disc) can be wedge shaped (tapered) or parallel shaped. Wedge shape designs include the solid, flexible and split wedge designs.

Seat rings are used to make replacement of a worn/leaking seat easier. Seat rings have a screw thread on the reverse side which can be screwed into the main valve body, the flat surface on the opposite side is the seating surface area that presses against the disc. If seat rings are not used, it is possible to machine a flat seat on the main valve body itself, unfortunately this makes replacing the seat impossible and the seat can only be machined a few times before the entire valve must be replaced.

Gate valve bonnets are often constructed of cast iron. Cast iron is brittle and this makes the bonnet prone to cracking.  Special care should be taken when handling and maintaining valves with cast iron bonnets.

As the stem penetrates through the valve bonnet, it is necessary to install a sealing gland to prevent leakage occurring through the gap between the stem and bonnet; sealing is usually achieved using a fibrous packing material.

Flanges are installed on the suction and discharge side of the valve so that piping can be easily connected.

The below video is an extract from our Introduction to Valves Online Video Course.

The sliding gate (disc) is lowered at a right angle into the flow path until it reaches the valve seat where it seals and stops the flow completely. To open the valve, the sliding gate is retracted into the bonnet.

Gate valves are typically employed for temperatures between -20 to 60 °C, pressures up to 16 bar(g) and flow rates of between 5 (liquids) to 20 (gasses) metres per second. Higher pressures cannot be achieved as damage to the packing would occur.

Gate valves are classified as rising, or, non-rising stem. `Rising` refers to the stem and if it rises out of the valve bonnet as the valve is opened.

‘Non-rising’ refers to the stem not rising from the valve bonnet irrespective of the valve position.

For non-rising stems, the stem rotates within the packing but does not move vertically, thus there is little risk of dirt or foreign particles damaging the packaging or entering the system. 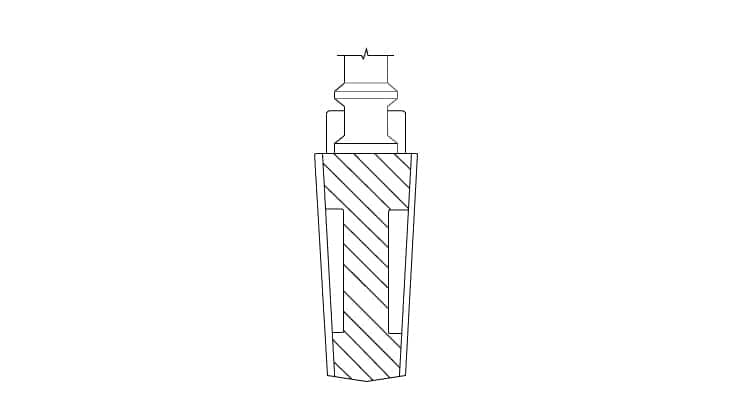 Flexible wedges are machined around the wedge perimeter in order to help the disc locate the seating surface more easily. The size of the machined area should not be too large as this reduces the strength of the disc (a thinner disc is a weaker disc). 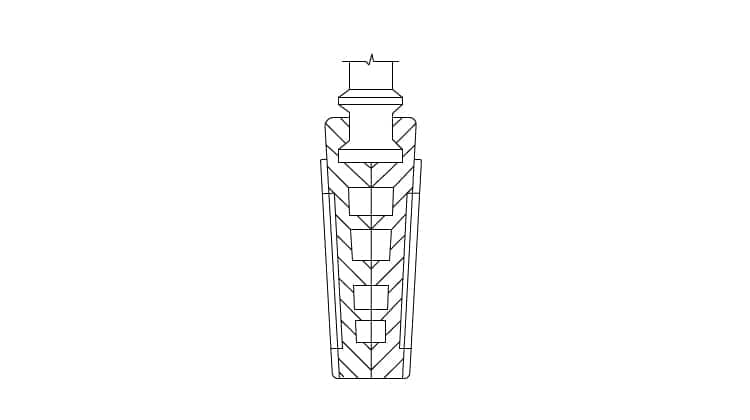 Flexible wedges are employed for systems operating with large temperature fluctuations. As the system temperature changes, the piping and valve dimensions also change due to the coefficient of thermal expansion. Having a flexible/variable seating area allows the valve to seat correctly even with some expansion and contraction of parts.

Split wedges offer flexible seating on both the suction and discharge side of the wedge. The wedge consists of two separate halves with each one being able to self-align in order to seat correctly; this self-aligning feature is made possible due to the flexibility obtained when using two separate halves for one wedge. 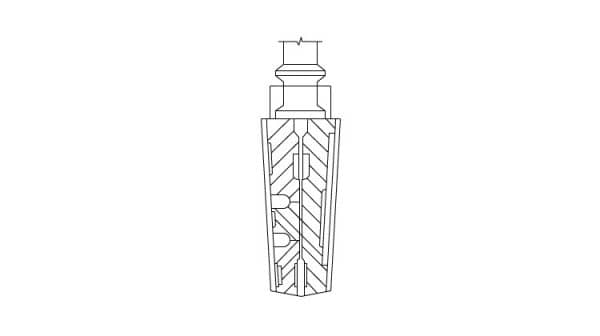 Parallel sliding discs utilise a spring placed between the two parallel discs. The spring is held under compression between the parallel discs and thus exerts constant force outwards onto the internal surfaces of the discs. As the valve is lowered into the valve seat, the spring is further compressed and the resultant force exerted by the spring ensures each disc is pressed firmly against the seat.

Parallel disc type valves can be used for both high and low pressure applications. The valve is well suited for any system where there are large temperature fluctuations.

The gate valve is very simple in design, relatively cheap and easy to maintain.

There is almost no pressure drop across the valve when the valve is in the fully open position.

Replacement of the gate valve disc is usually not a difficult task.

Replacement of the seat rings is usually not a difficult task.

Gate valves are not well suited to throttling (any valve position between fully open and fully closed) as this creates turbulent flow and frictional losses. A valve left in the almost closed position will cause the flowing medium to flow at very high velocity across the valve’s seating surfaces, this can lead to damage of the surfaces (‘wire-drawing’) and passing/leaking of the valve.

Gate valves create turbulent flow when throttled and experience excessive vibration as a result. This situation should be avoided to prevent damage occurring to the valve packing and other internal parts.

Compared to a globe valve, a gate valve’s seating surfaces are more difficult to refurbish (if seat rings are not used).

This 3D model shows all major components associated with a typical gate valve, these include: