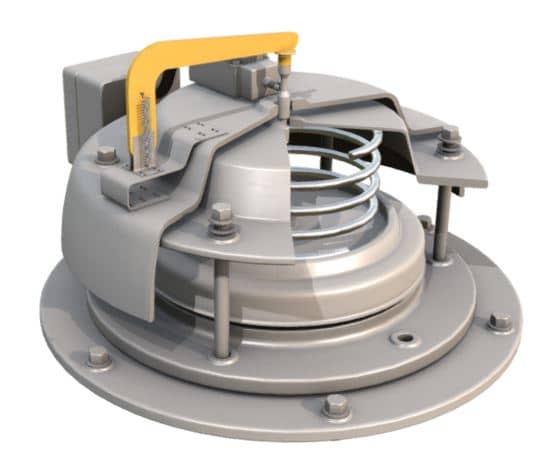 During a large electrical fault, a high temperature arc will be created and this arc will cause decomposition and evaporation of the surrounding insulating liquid. This sudden increase in volume within the transformer tank will also create a sudden increase in tank pressure. The pressure must be relieved to prevent a potential tank rupture. PRDs allow the pressure to be released. PRDs are typically classed into two types, PRDs that open then close and PRDs that open and remain open. Generally, the re-closing type appears to be more favored in today's market.

A rod connected to a colored indicator usually informs personnel that the PRD has actuated, this is useful as personnel are unlikely to be in the area during the time of actuation. Aside from the local visual display, the PRD will almost certainly be connected to the alarm monitoring system as well as the transformer tripping circuit.

It is imperative that the PRD lift pressure is correctly calculated in order to guarantee its correct operation. PRDs should be maintained annually. Testing of the PRD can usually be done by hand.

This type of PRD is not favored today due to recent technological advances making its design redundant. Older designs featured a relief pin and diaphragm setup. In the event of high tank pressure, the relief pin would break and the pressure would be relieved. The tank remained open to atmosphere until such time as the PRD was replaced.

Relief pins are designed to break at a certain pressure and cannot be repaired. Each pin is labeled to indicate its breaking strength and lifting pressure. It is imperative that the broken pin is replaced with a pin which has the exact same settings as the broken pin because otherwise a catastrophic failure of the unit could occur (tank rupture may occur before PRD lifts).

Painting of a PRD should be conducted with care as any painting of the working components is likely to change the lifting pressure of the PRD and thus make it open later (if at all).

Minor controversy surrounds PRDs because some industry experts believe a fault would need to be near the PRD in order for the PRD to operate effectively. A fault that is further from the PRD is more likely to rupture the tank than one that is close to the PRD. For this reason, industry experts argue over the true effectiveness of PRDs.