SF6 circuit breakers utilize Sulphur Hexa Fluoride (SF6) gas as the surrounding insulating medium for extinguishing the arc established between the moving breaker contacts. It has many favourable characteristics that make it an ideal insulation candidate in modern high voltage switchgear:

Some of the disadvantages of SF6 gas are its high cost, its tendency to form corrosive metal fluorides during arcing and the fact that it is a greenhouse gas.

At present, SF6 circuit breakers can be classified into two major categories: 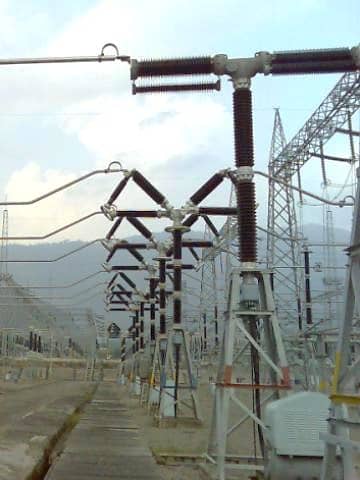 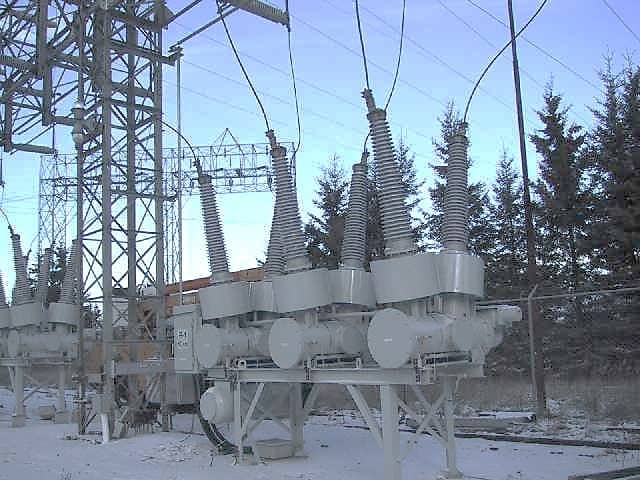 There are also several different ways in which the electrical current (and resulting arc) in an SF6 circuit breaker can be interrupted. These types include: double pressure (now obsolete), single pressure (also called puffer), self-blast (where arc energy supports pressure build up in arc chamber), rotating arc (arc rotates electro-dynamically in cool background gas) and double motion technology (with two moving contacts). In addition, the drive mechanism of the circuit breaker can be of the hydraulic or spring-loaded type.

For the remainder of this article, we will look in more detail at the basic assembly and working of an SF6 gas insulated circuit breaker that uses single pressure (puffer technology) with a spring loaded operating mechanism; this is the most widely used type in the high voltage industry.

The separation of circuit breaker contacts, quenching of the resulting arc and interruption of current takes place in the interrupter unit. It houses two sets of contacts which are commonly called the ‘main’ or ‘normal current carrying contacts’ and ‘arcing contacts’. Both types of these contact sets have one stationary contact whilst the other contact is able to move. Current carriers (providing connection to the external circuit breaker terminals) are connected to the stationary and moving main contacts. The tips of all circuit breaker contacts are coated with a copper-tungsten arc-resistant material.

The main body of the interrupter (which is filled with SF6 gas) contains a moving puffer cylinder that can axially slide upward and downward along the contacts. There is one stationary piston inside the cylinder which is fixed with other stationary parts of the SF6 circuit breaker, in such a way that it cannot change its position during the movement of the cylinder. A nozzle is located at the opening of the cylinder. 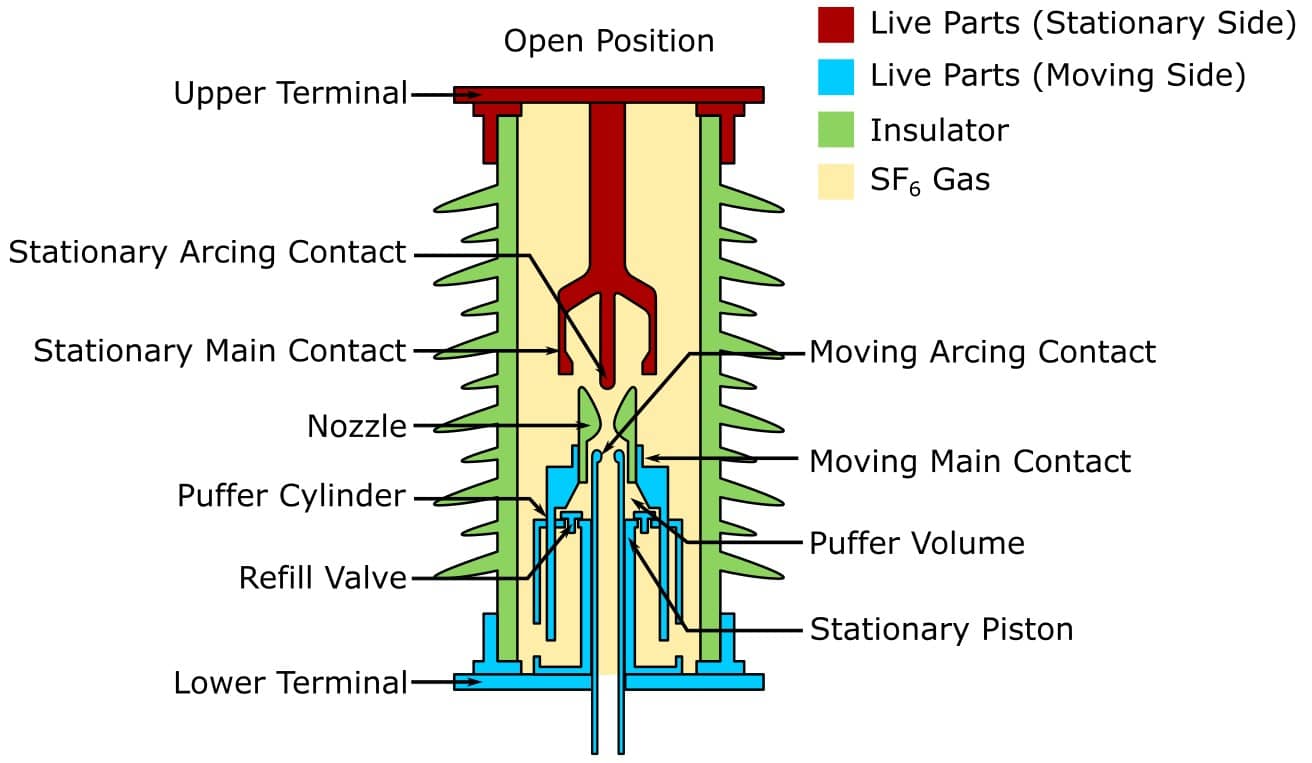 The interrupter unit is vertically mounted on top of an insulating stack which is made up of a hollow insulator encapsulating the drive rod which connects the mechanical operating mechanism of the circuit breaker to the moving contacts housed within the interrupter. Depending on the voltage rating of the system, the insulating stack may be a single piece, or multiple segments mechanically coupled in series. Just like any other insulator, it provides adequate line-to-ground dry arcing and creepage distance to prevent flashovers associated with transient overvoltages and ambient pollution. The complete circuit breaker unit is usually fixed on a steel structure which secures it to an embedded concrete foundation.

The driving apparatus provides the kinetic energy required to open and close the circuit breaker contacts. It consists of a set of opening and closing springs that are charged manually, or with the help of a small electric motor.

The control cubicle communicates between the circuit breaker mechanical operating mechanism, system protection (relays) and supervisory devices. It can be configured for either ‘remote’ or ‘manual’ operating setting. 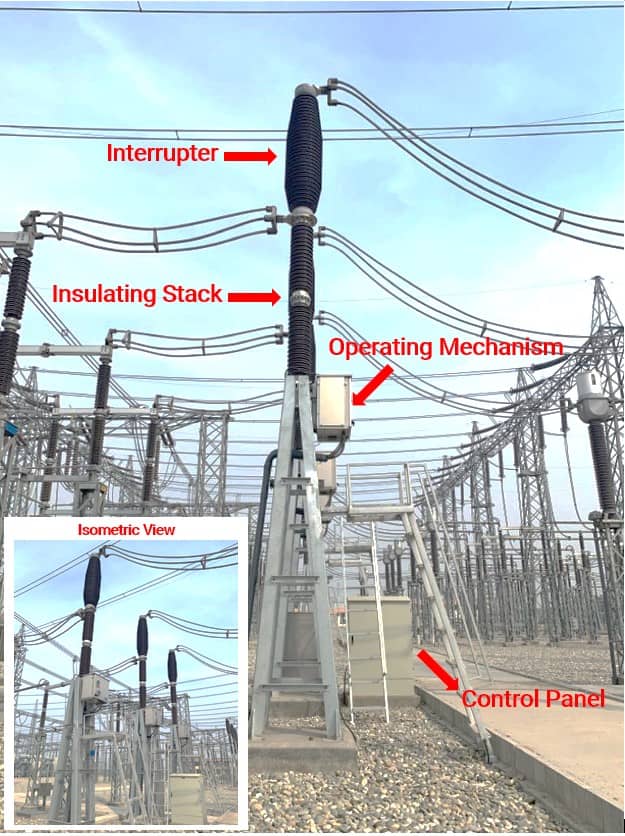 At extra high voltage (usually 380-kV and above), due to manufacturing economics and design requirements, the SF6 circuit breaker may have notable differences in construction and may also feature additional components: 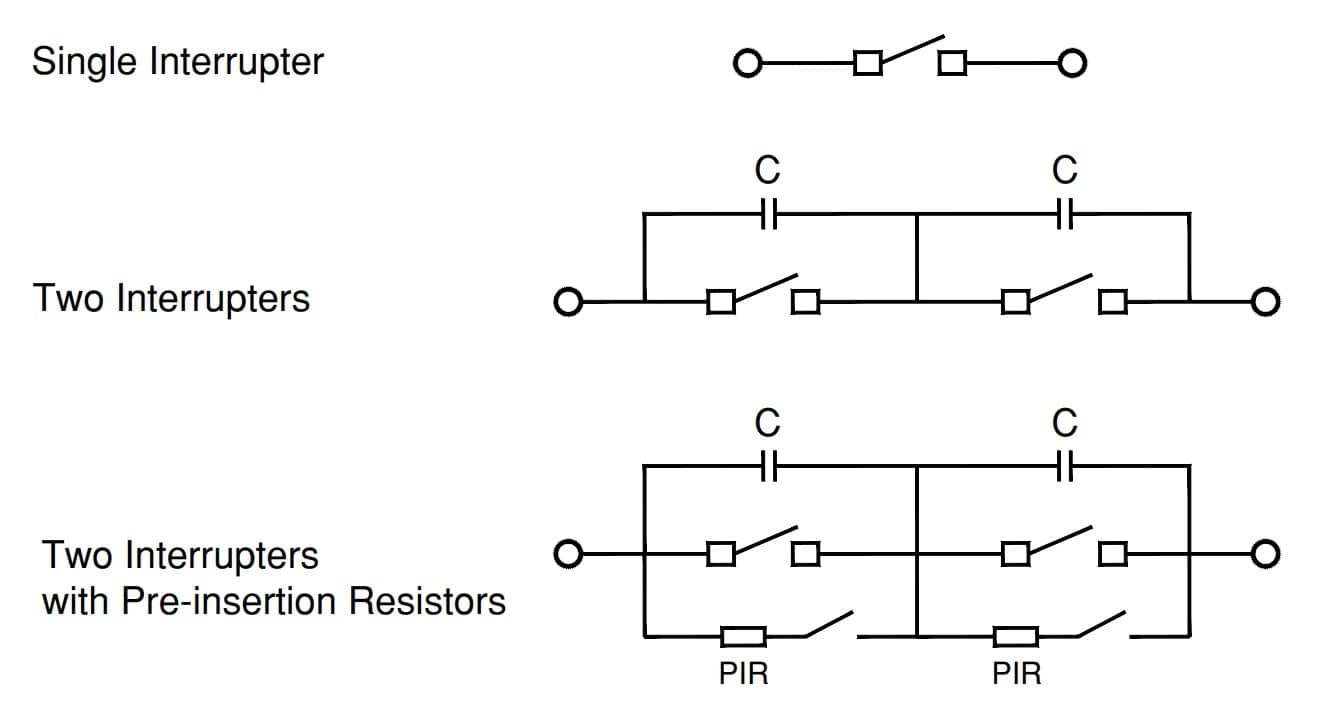 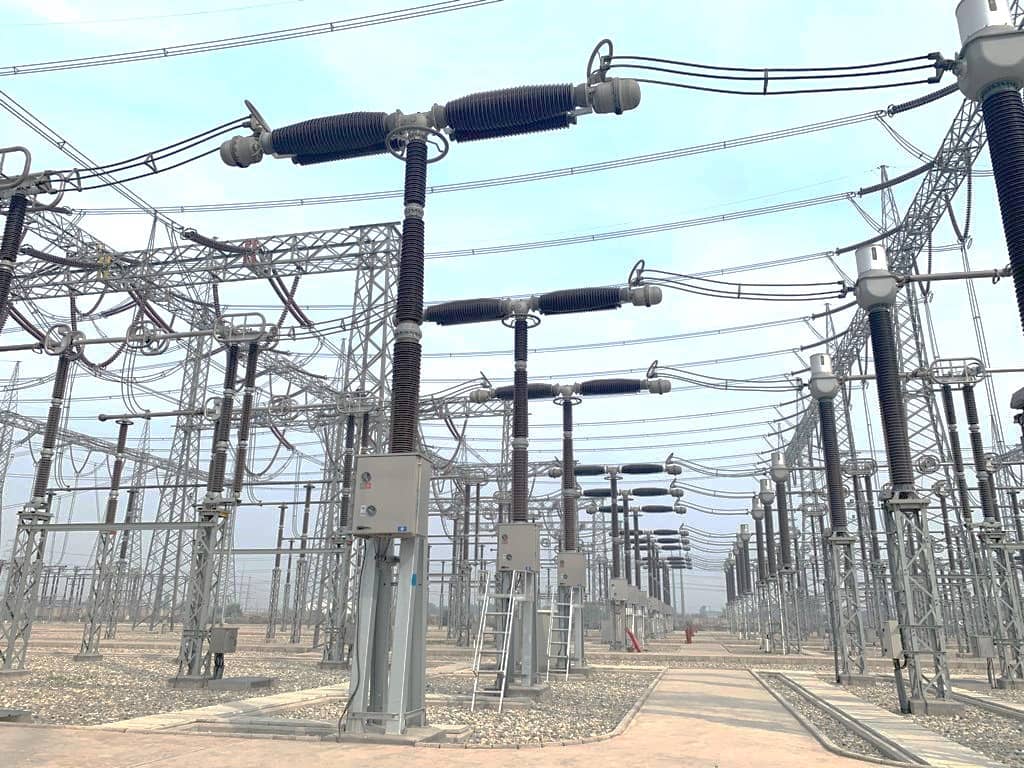 In the normal condition, the circuit breaker contacts are closed and current flows from one contact carrier to the other via the main contacts and the sliding puffer cylinder.

When the circuit breaker control panel receives an opening command (to clear a fault or disconnect part of a network), it sends a signal to the trip coil of the mechanical operating mechanism, which in turn releases the latch holding the charged opening spring. As the opening spring discharges, it pulls the drive rod (connected to the interrupter) in a linear direction, which causes the moving contacts and puffer cylinder to move downwards.

The movement of the puffer cylinder against the stationary piston leads to a decrease in the puffer cylinder’s internal volume, which causes compression of the SF6 gas inside the cylinder. Due to contact overlap, gas compression starts before any contacts open. As the downward movement continues, the main contacts separate and the current commutates to the arcing contacts which are still in the closed position (due to their physically longer construction). During the course of further opening, the arcing contacts start to separate and an arc is established between them.

As the arc flows it blocks the flow of SF6 gas through the nozzle to some extent. Thus, the gas pressure in the puffer cylinder continues to increase. When the sinusoidal current waveform approaches zero, the arc becomes relatively weak and the pressurized SF6 gas inside the puffer cylinder flows axially (through nozzle) over the arc length. This blast of SF6 gas removes the thermal energy in the contact gap and reduces the degree of ionization (electrical conductivity) such that the arc is extinguished.

When the arc is interrupted, transient recovery voltage (TRV) starts to appear across the contacts; the opening speed of the circuit breaker contacts should be fast enough to create an adequate contact separation distance to withstand this voltage stress. In case the contact gap’s dielectric strength is lower than TRV stress, the arc will be re-established in a phenomenon which is commonly called circuit breaker re-ignition or re-strike.

In addition to the general characteristics normally associated with an electrical switch i.e. low contact resistance when closed and almost perfect insulation in open condition, a high voltage SF6 circuit breaker needs to fulfil additional design requirements. Amongst these, the most pertinent ones are briefly described below: