In thermal power plants, the steam that is produced by boilers is sent via high pressure lines to the steam turbine(s) to generate electricity. There are three main ways of admitting steam into the turbine: via nozzle, throttle, or bypass governing.

In high-pressure (HP) turbines, steam enters the turbine admission sections via a set of control valves. These same valves are used to completely isolate the steam in emergency situations, or when the turbine is offline. With HP turbine designs, steam is admitted via nozzle groups, with each nozzle group being fed from one associated valve. In other turbine designs, especially those operating at lower pressures, cam or bar operated multi throttle valves are used; with this setup, a single valve feeds to multiple nozzles. 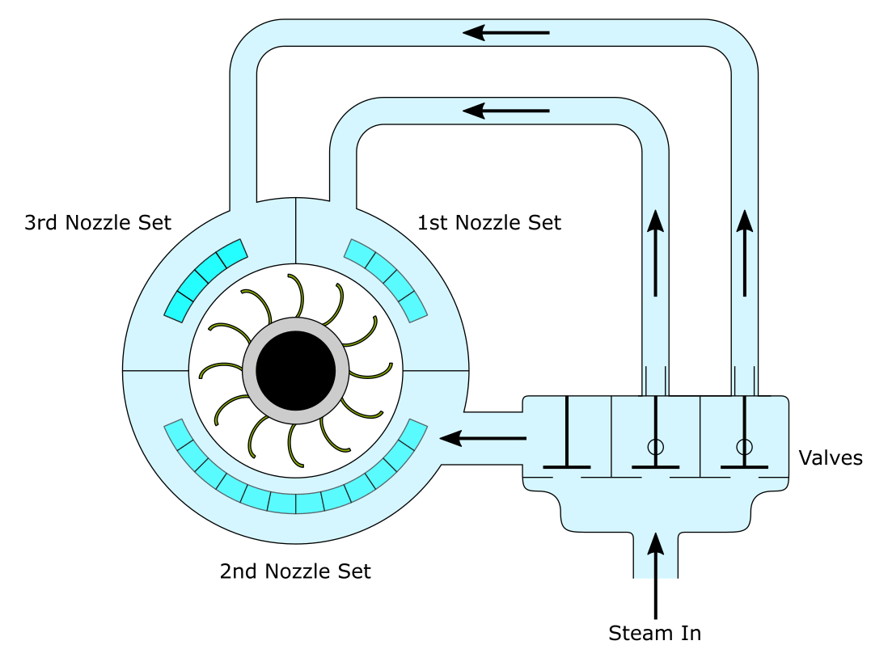 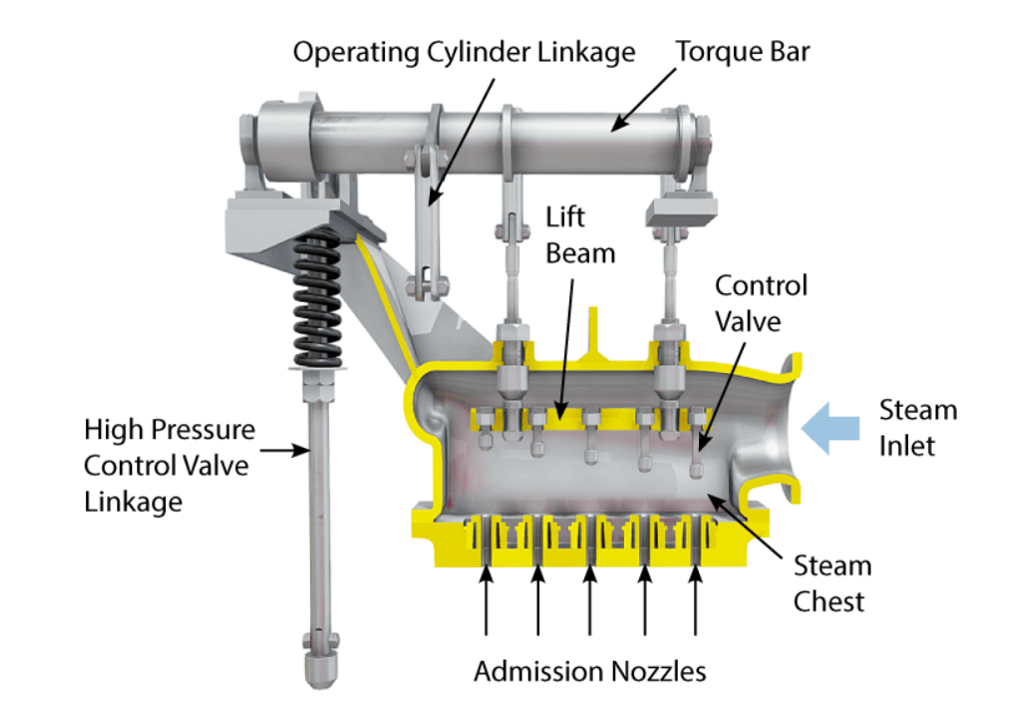 In this arrangement, an operating cylinder (hydraulically actuated) is extended or retracted, which causes the torque bar to rotate. As the torque bar rotates, two lift rods are moved up or down in a linear direction, which causes a lift beam to move proportionally also. Multiple control valves are connected to the lift beam, with each valve stem passing through the beam, but not physically connecting to it. Sequential opening and closing of the valves occurs because each valve has a different stem length; poppet valves are typically used for this type of application.

Within the steam chest, any number of control valves can be used, but five is the standard configuration (as illustrated in the design above). This type of steam control system requires accurate timing to ensure the turbine operates at high efficiency.

An inlet stop valve is installed prior to the steam chest; the stop valve admits steam during turbine start-up and acts as an emergency shut-off valve for the turbine.

The design discussed in this article uses a cam to operate the valves, but a bar lift method is also possible.  The bar method uses linear motion rather than rotary motion, to actuate the valves.

As cams can be externally adjusted, there is no need for the whole valve chest to be stripped when maintenance is required; the opposite is true for the bar lift valve design.

The lift beam is a metal bar with holes perforating through it. Each valve stem is passed through the lift beam and connected to its associated spherical valve disc.

The torque bar mechanically connects the low-pressure linkages, break-away linkage, and operating cylinder linkage. Force applied to the bar by the operating cylinder causes it to rotate, which in turn causes linear motion to be transferred to the LP and HP control valve valves.

A mechanical linkage connects the LP control valve to the torque bar.