Circular primary clarifiers are used to separate suspended solids from a liquid; they are used extensively in the waste water treatment and water treatment industries, but also in mining facilities, reverse osmosis plants and paper and pulp plants (to name a few industries). 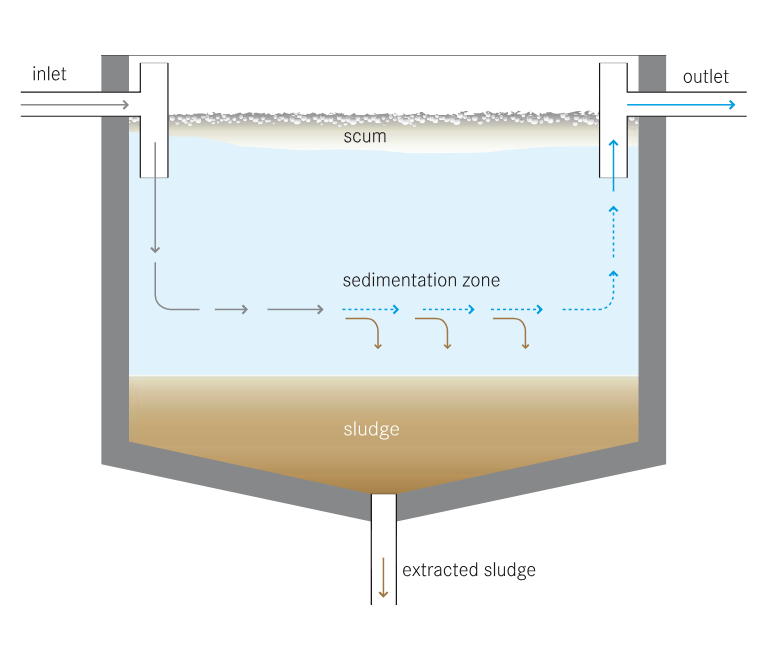 Primary clarifier designs are either circular, rectangular or steep sided. Typical clarifiers have a detention/retention time (total time within the clarifier) of approximately 1-2 hours and can separate up to 95% of settleable solids from the process stream.

Circular primary clarifiers have found widespread application in many industries due to their relatively simple construction, high effectiveness and low operational costs.

Influent enters the clarifier through the influent inlet pipe and exits to the energy dissipating inlet (EDI). The purpose of the EDI is to reduce the velocity of the influent which increases the speed at which the suspended solids will separate from the liquid.

The clarifier is split into three main zones, these are the influent, settling and effluent zones. After leaving the EDI, the influent enters the settling zone.

Heavier settleable solids sink to the bottom of the clarifier, accumulate as sludge, and are removed using rakes/ploughs. Each rake has associated scrapers which progressively move the sludge from the clarifier base to the sludge pit. The sludge is then pumped from the sludge pit to a waste disposal area, or for further treatment.

Lighter floatable solids float to the top of the clarifier, accumulate as scum, and are removed using a scum skimmer. The skimmer discharges the scum to the scum trough, where it drains away to a remote location.

Once the settleable and floatable solids have been separated from the influent, the influent passes through a weir (usually a v-notch weir). The purpose of the weir is to allow a thin film of water to pass through the weir, but very few suspended solids. The weir is usually preceded by a scum baffle which prevents scum reaching the weir.

After flowing through the weir, the liquid enters the effluent launder. Effluent from the launder is extracted and further treated, or, discharged directly from the plant.

The largest performance factor influencing a circular primary clarifier is the flow rate and velocity of influent through the clarifier. Several ratios have been developed to measure the clarifer performance. The surface overflow rate (SOR) compares the total influent flow rate to the surface area of the tank. The weir overflow rate (WOR) measures the flow over the weir compared to the length of the weir. Both of these ratios (SOR & WOR) are useful in determining clarifier performance.

The below 3D animated video shows how a typical circular primary clarifier works and its main components.

This 3D model shows all major components associated with a primary clarifier, these include: