‘Comminution’ is the term used to define the process that reduces materials (especially mined ore). It is the action of reducing a material to minute fragments or particles. The process is typically achieved in mining operations through stages of crushing and milling.

In the past, mining activities were arduous and labour intensive. Ore breakdown was derived with a miner’s pick, drill bit, or sledgehammer. Until the mid-1800s, sizing and crushing operations relied mostly upon manual labour; water powered trip hammers became popular much later, during the Industrial Revolution. Throughout this early period, only relatively small volumes of rock and aggregate could be produced. These small amounts were then loaded into sacks or wagons for transport.

During the Industrial Revolution, explosives were first deployed for use in commercial mining. Mining using explosives was referred to as blasting. By the mid-1800s, blasting was a widespread mining technique used for bulk mining and it would be shortly followed by steam shovelling. These new mining techniques revolutionised the mining industry, allowing for the production of ever larger amounts of liberated materials.

The mining industry has seen growth in the past century due to the rapid increase in demand for minerals; this growth has required significant upscaling of production tonnages. The increase in demand has led to the development of new and more efficient crushers (machines used for size-reduction). As crushing tonnages increased, so did the requirements to convey and transport their inputs and outputs. To cater for this, items such as flat-bed conveyors and haul trucks were introduced. 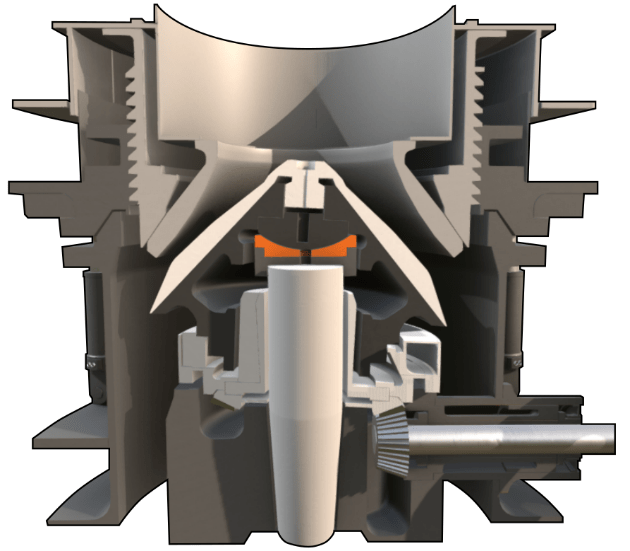 Cone crushers are capable of crushing all types of medium to hard mineral rocks and stones. It also offers many advantages over other crusher designs, such as low energy consumption, reliability, high efficiency (compared to other crushers), and a high reduction ratio (feed/input size compared to product/output size).

Despite being present in many industries, it is most commonly used in the construction and mining industries. Cone crushers are generally found in use for secondary, tertiary, and downstream crushing services, with jaw crushers and gyratory crushers used for primary crushing operations.

In some cases, the Run of Mine (ROM) ore from the mine can be fed to a cone crusher via conveyors and screens, but more often, the feed material will come from upstream primary crusher(s) and cone crushers will be used for downstream crushing stages.

A crusher is a machine designed to reduce the size of large rocks to smaller rocks, gravel, sand, or rock dust; this is essential for efficient transport of the product via conveyors etc. Crushing is the first of many stages that lead to separation of the mineral(s) from the waste (gangue) material. Waste material can be discarded or recycled allowing the mineral rich product to be further processed at the main plant.

Various types of crusher and mineral separator may be employed depending upon the throughput, hardness, and properties of the mineral being processed. In all cases, the crushing stage is essentially achieved by transferring a mechanically amplified force (via mechanical advantage) to a material, to breakdown the bonds which hold the material together.

Crushing is achieved by passing the feed between two solid surfaces, then by applying sufficient force to bring the surfaces together so that the molecules of the material being crushed are separated from (fracture), or, change alignment in relation to (deform), each other.

Crushers are commonly classified by the degree to which they fragment the starting material, with primary and secondary crushers handling coarse materials, and tertiary and quaternary crushers reducing particles to finer gradations. Each crusher is designed to work with a certain maximum size of raw material, and often delivers its output to a screening machine (screener), which sorts and directs the product for further processing. In many cases, initial crushing stages are followed by further milling stages (if the materials need to be further reduced).

There are three common crushers used at mining and processing plants:

Typically, the initial crushing stage is completed using either gyratory crushers or jaw crushers. It is often the case that there will be only one crusher installed, and this will be referred to as the primary crusher. 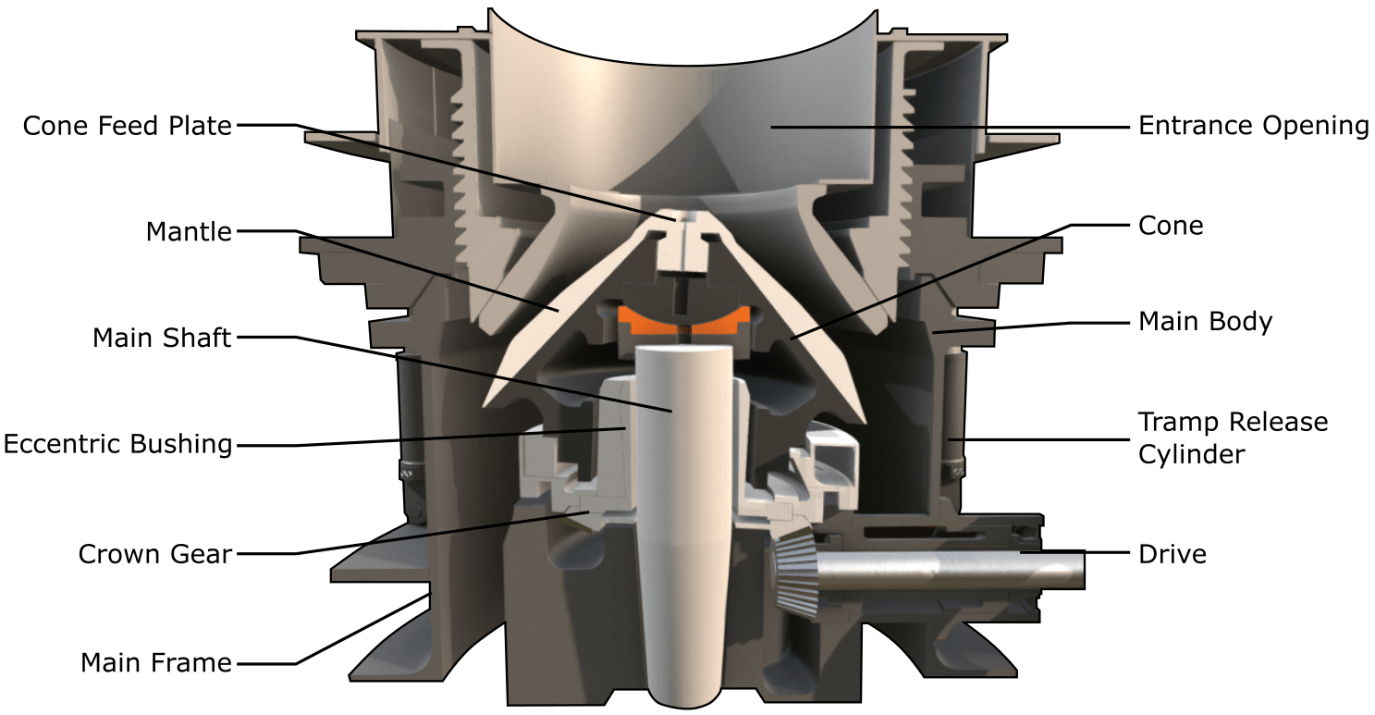 The feed is fed by conveyors to a feed bin above the vertically mounted cone crusher. Feed enters the crusher via an opening in the upper shell. Depending upon the cone crusher design, a distribution plate may be used to distribute the feed evenly as it enters the crusher. A spider cap (if fitted) houses the upper bearing of the main shaft; the shaft is lubricated with grease or oil depending upon the design. 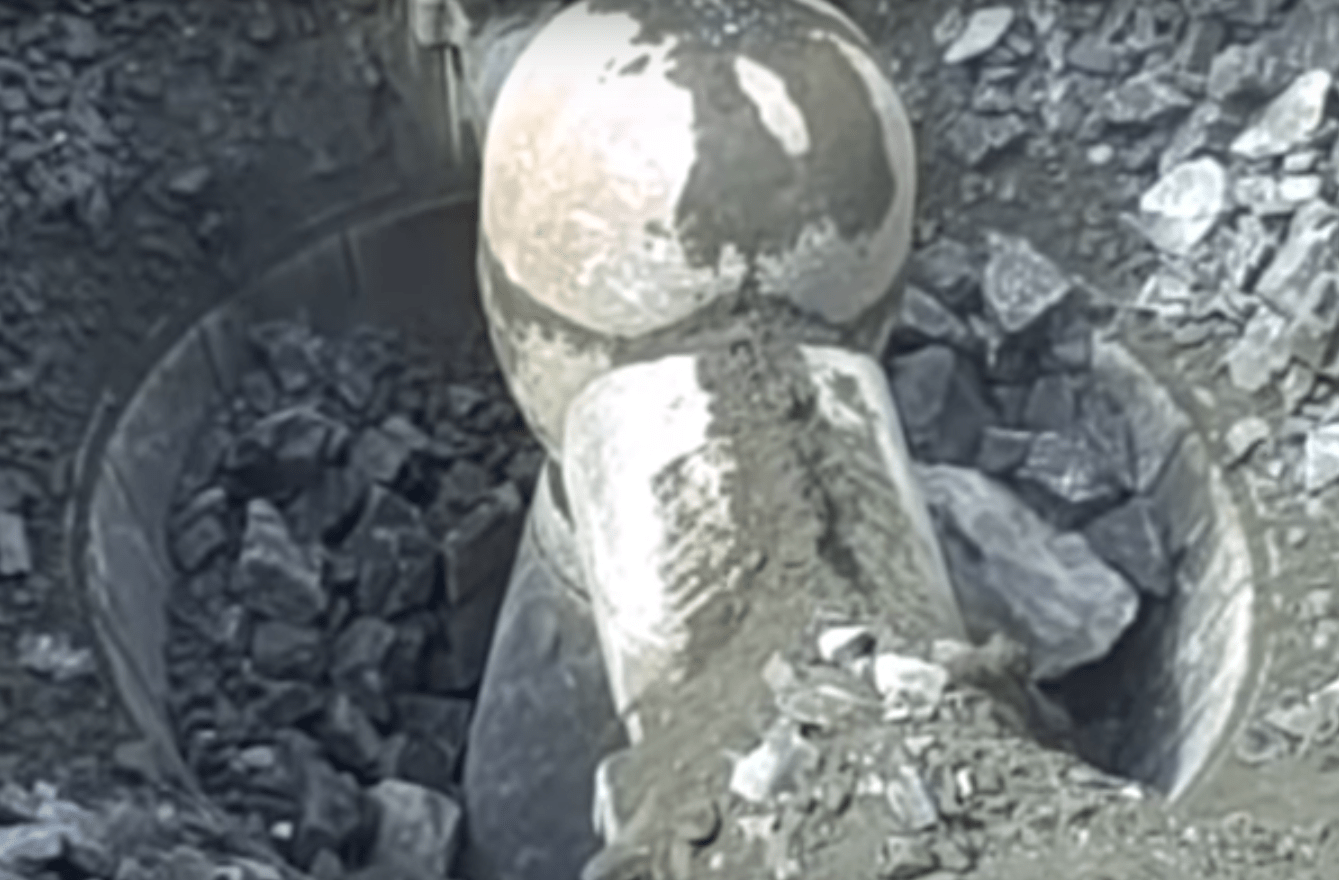 The main shaft is normally manufactured from high grade forged steel (annealed for stress relief). The upper part of the shaft is supported by a self-aligning bearing in the spider cap (if fitted). The self-aligning bearing is designed to cater for the movement generated by the oscillating shaft; this oscillating movement is caused by the lower eccentric drive arrangement. The journal of the spider bearing is shrunk onto the top of the main shaft.

The mantle is installed over the head/cone, which is mounted onto main shaft. The mantle forms part of the replaceable wear surfaces and it oscillates with the moving shaft (moving wear surface). Mantles are typically manufactured from manganese steel alloy.

A concave ring (bowl liner) is housed within the upper casing; it forms the stationary wear surface.

Eccentric motion is achieved by the lower eccentric bushing and drive arrangement located at the bottom of the main shaft. This arrangement is similar in design and principal to that used by gyratory crushers. The eccentric bushing is manufactured from high carbon steel fitted with a bronze inner wear sleeve. It is possible to adjust the eccentric throw by installing different sized sleeves. The ‘throw’ defines the range of movement of the shaft and consequently the distance between the mantle and bowl liner at any given point, this is particularly relevant at the choke point (the place where the mantle’s diameter is largest and where the mantle comes physically closest to the stationary wear surfaces).

Feed from a feed hopper is fed into a large opening at the top of the cone crusher. Feed then falls due to gravity and is crushed between the mantle and concaves; crushing takes place in the crushing chamber. As the feed moves towards the drive end of the cone crusher, its size decreases (due to the crushing action), and ever smaller pieces move towards the drive end of the crusher. After passing through the crusher, the product -now at a much-reduced size- is discharged through an opening in the bottom shell. 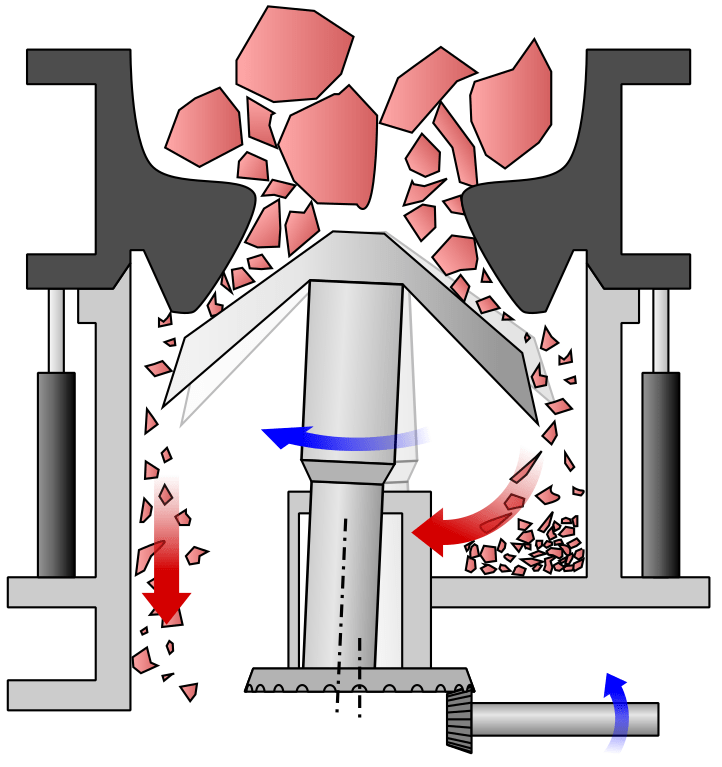 Crushing action is produced by the oscillation or throw (opening & closing) between the moving mantle liner, mounted on the cone, and the stationary concave liners mounted within the upper casing of the crusher. The mantle and concaves form the working surfaces of the crusher, as this is where the crushing action occurs.

Eccentric motion is achieved by the lower eccentric bushing and drive arrangement at the bottom of the main shaft. The input pinion drive countershaft is supported by pinion bearings and powered by an electric motor. An external gearbox or belt drive arrangement reduces the motor speed at the crusher; typical crusher speeds range from several hundred rpm up to approx. 1000 rpm. In some cases, a clutch system may also be used to absorb shocks. The pinion on the countershaft meshes with the eccentric gear drive, or crown gear. 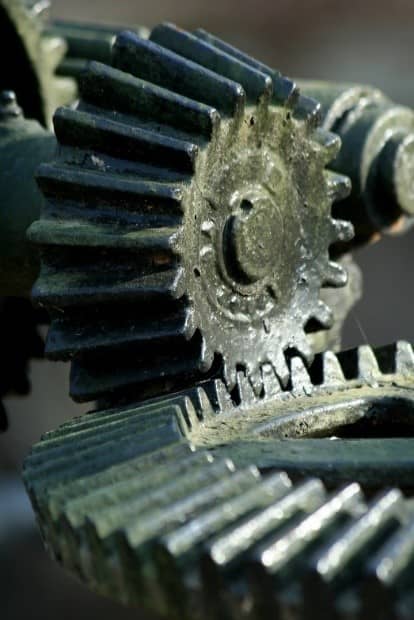 The inner surface of the eccentric bushing is machined off-centre from the centre-axis of the crusher. As the eccentric bushing rotates, the lower shaft oscillates in an elliptical orbit around the centreline of the crusher. This action causes the gap between the mantle and concave liners to open and close upon each rotation of the shaft. At the upper end of the mantle this movement is very small, but as the feed falls lower, the throw increases and the crushing force also correspondingly increases. 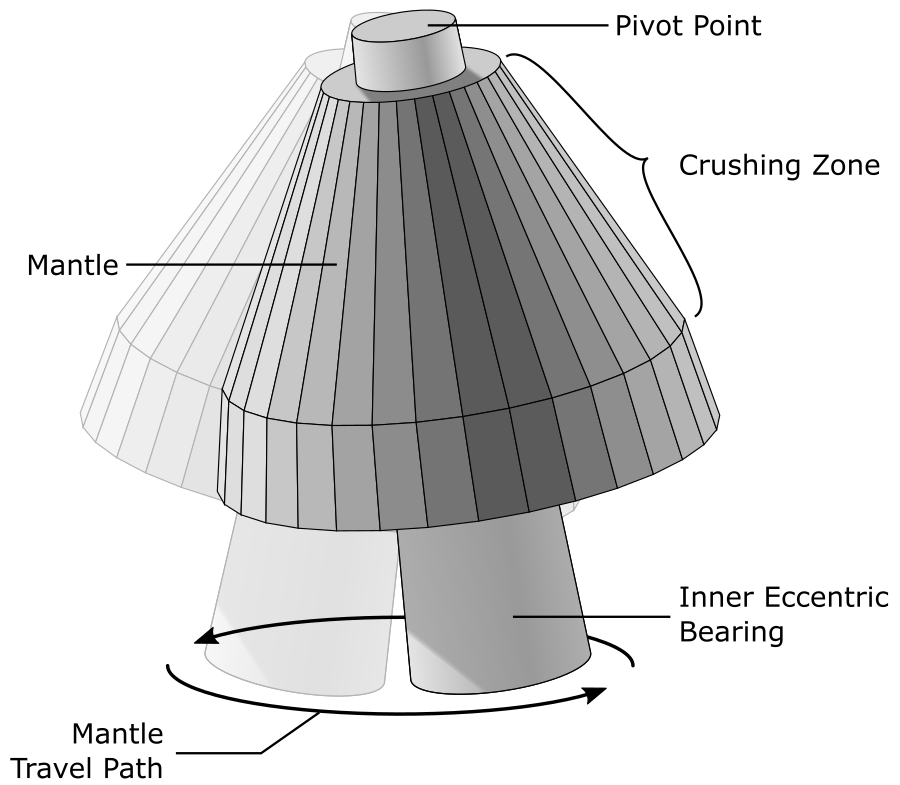 Crushed feed falls to the bottom shell assembly and is discharged to the product conveying system for further processing. The lower casing also houses a forced lubrication and hydraulic system, which is critical for the drive arrangement and tramp release cylinders (if fitted).