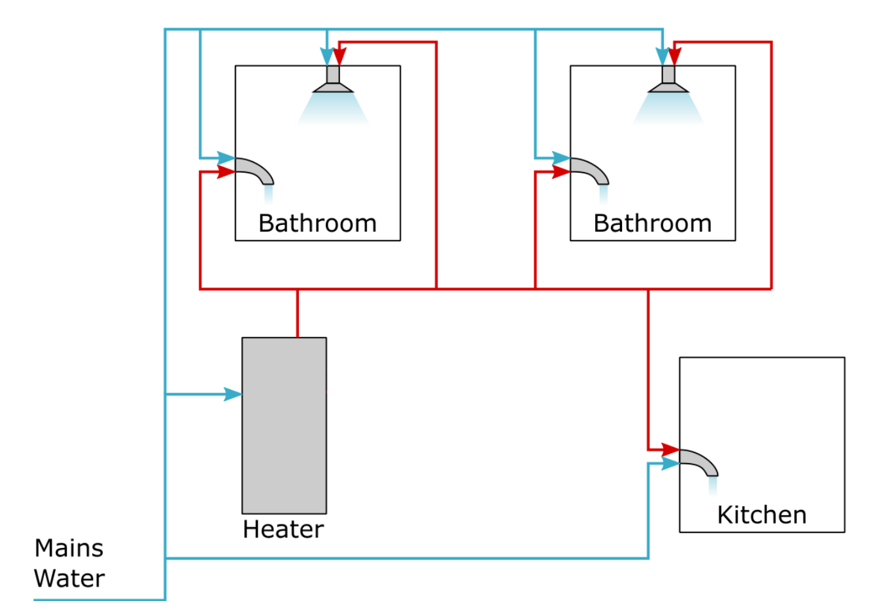 Cold water is fed to the bottom of the heater tank via a dip tube and is then heated by electrical resistors. As the water is heated, it rises to the top of the tank due to natural convection and is discharged through the hot-water outlet for use elsewhere in the building. 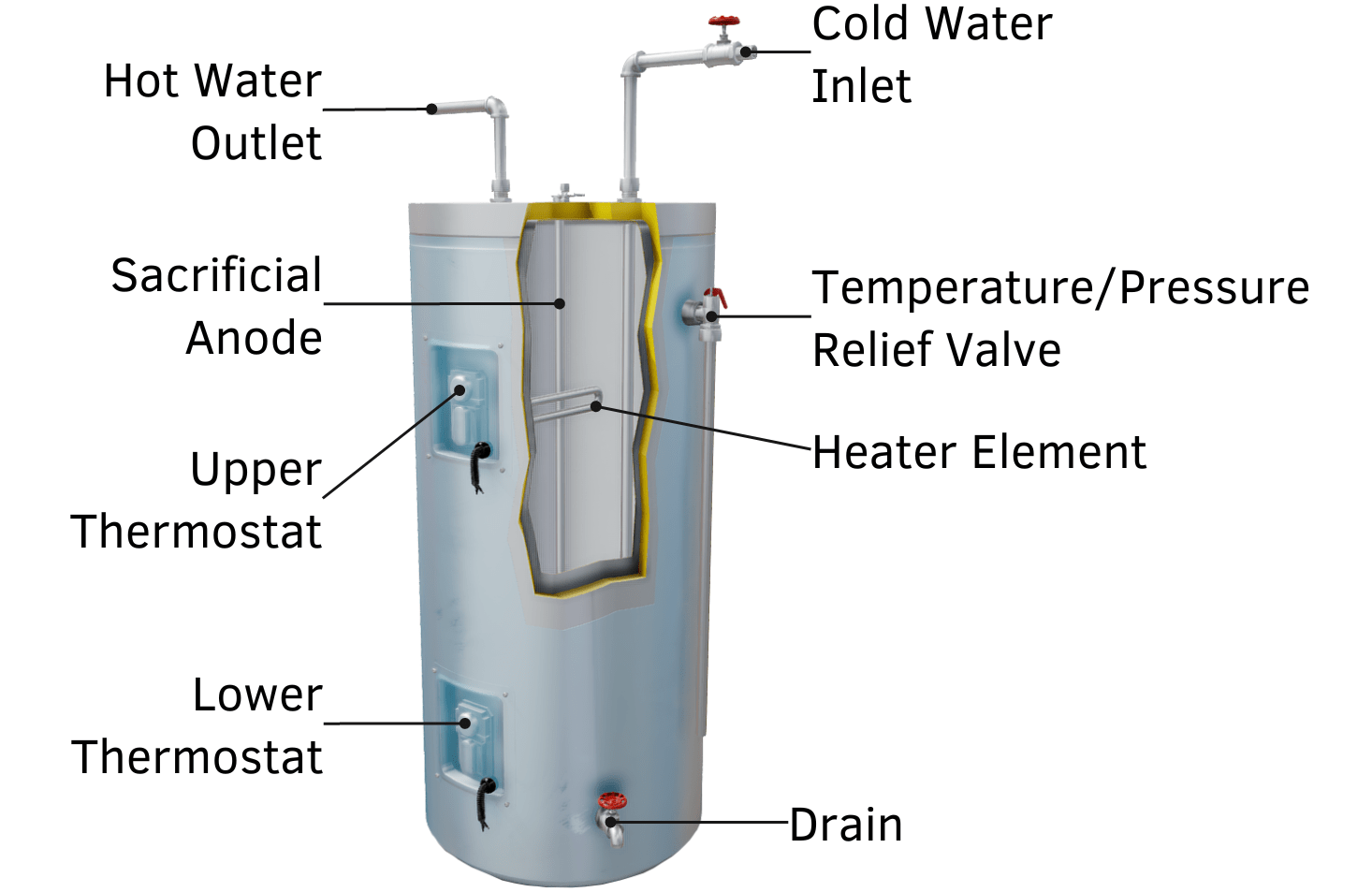 The heater tank is usually manufactured from stainless steel, with its inner surface protected by a glass-based coating, glass-based lining, or enamel. Polymer-based coatings are used in some newer models, but this is not common.

The tank is surrounded by insulation to reduce the amount of heat that is lost to the surrounding air, thereby increasing its efficiency. The image below shows fibreglass insulation, which a common type of thermal insulation. 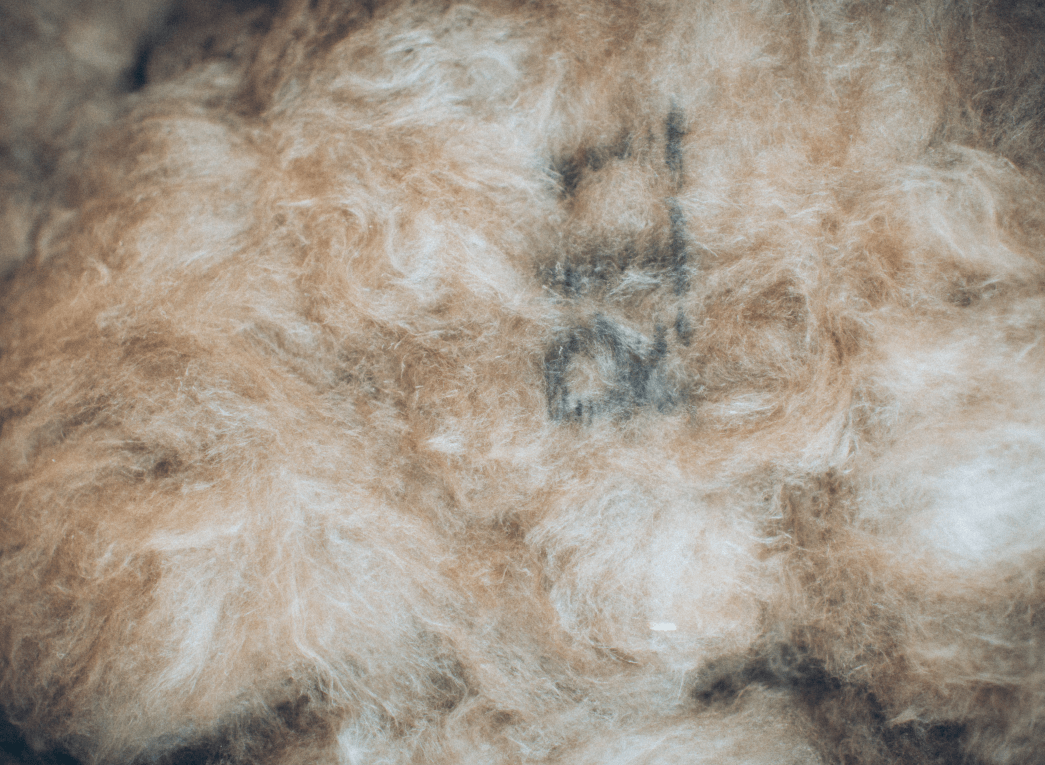 The cold-water inlet will include a valve – typically a ball valve – to control the water being fed to the tank. Ball valves (also known as quarter-turn valves) are used because they are simple and fast-acting. 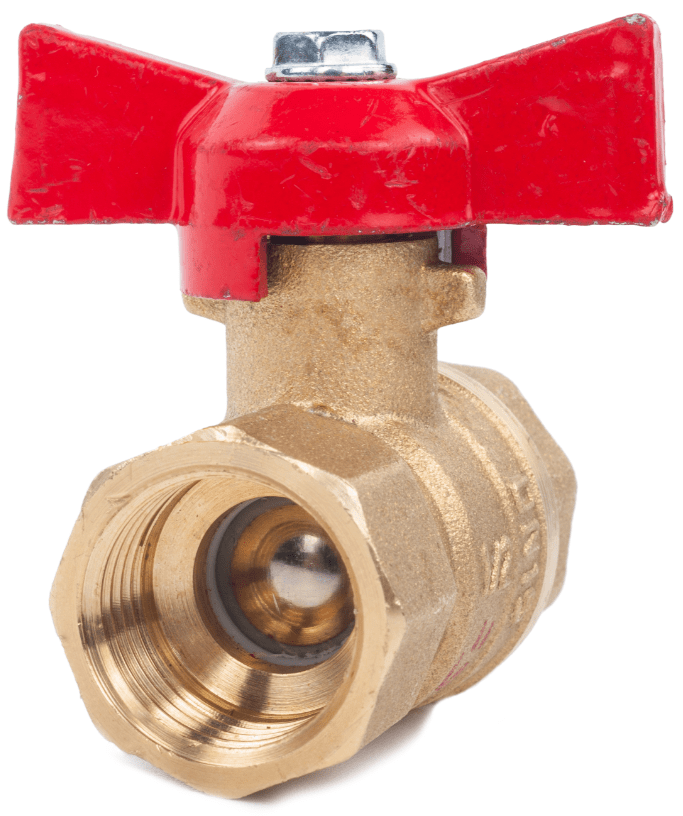 The heating elements are installed perpendicular to the length of the tank. Each heating element consists of an electrical resistor housed within a heat-conducting tube and connected to an external electrical supply. Electrical current flows through the resistor and heat is generated because the resistance path (measured in ohms) is high; the heat generated is transferred to the water surrounding the resistor tube.

In gas water heaters, a gas burner would is used to heat the water. Gas water heaters are designed differently as they require both an exhaust path and an air inlet. The heat exchange area within a gas water heater is larger than that of an electrical resistor heater, due to the large exhaust gas duct within the heater. 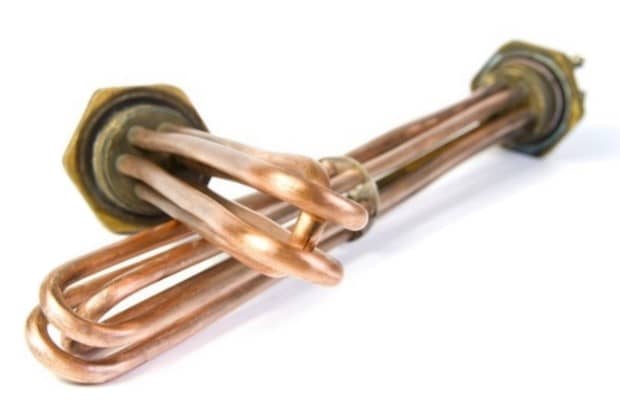 An electric water heater includes at least one thermostat which is used to control the temperature of the water in the tank; it achieves this by controlling when the heating elements are turned on and off. If each resistor has its own thermostat, the upper resistor is usually set to switch on at a higher temperature than the lower resistor; this setup allows for the temperature difference that usually exists within the tank (both heaters switch on at the same time if the temperature difference in the tank is accounted for, rather than the lower heater always switching on first because the lower part of the tank has a lower temperature). Turning the resistors on and off at the correct time leads to even wear across the resistors, which means all resistors can be maintained at the same interval.

The water temperature within a water heater tank is usually 50°C (120F), but this varies depending upon what temperature is desired and for what application. 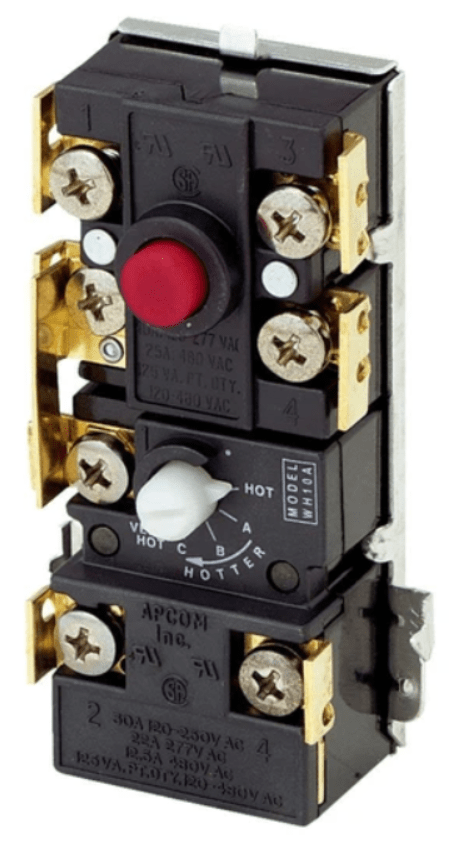 It is possible to vent air at the point of use, although it often takes time to bleed air from the system completely (spluttering erratic water flow is the result). An alternative method is to use an auto-bleed valve; these are often installed at various positions within larger water systems to ensure air is continuously bled from the system.

A temperature/pressure valve (TPR valve) is installed near the top of the tank. The TPR valve will open if the water in the tank reaches too high a temperature, or, if over-pressurisation occurs (the pressure becomes too high). In either of these circumstances, the valve opens and releases water through a drainpipe. The purpose of the drain pipe is to protect anyone working nearby who may otherwise have been scalded by the discharged hot water.

The temperature/pressure relief valve (TPR) can be tested by lifting its lever, although this tests only the operating mechanism and not the correct over temperature and over pressure set points. 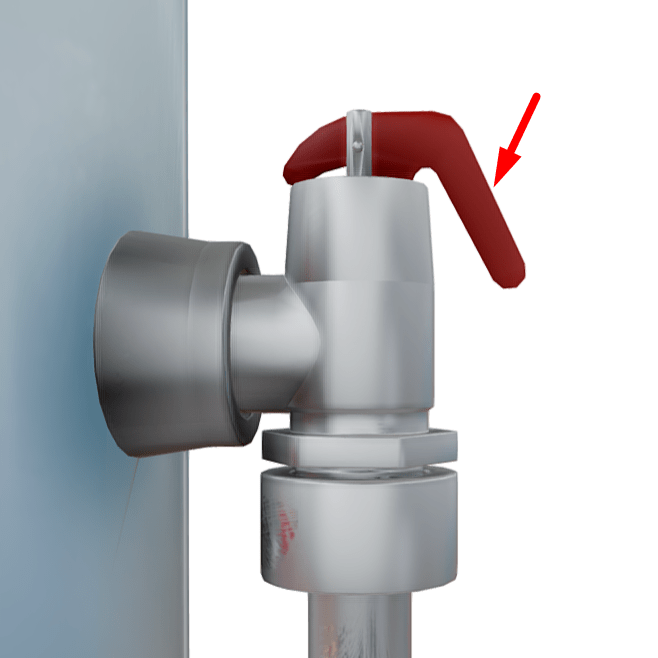 Next to the dip tube is a long cylindrical shaped rod; this is the sacrificial anode. The anode corrodes over time, preventing galvanic corrosion occurring on more vital -and expensive- metal surfaces. Sacrificial anodes are generally manufactured from magnesium, aluminium, zinc, or an alloy of the three; the anode material surrounds a steel rod which is installed along the centre axis of the anode.

Anodes are used for many other applications because galvanic corrosion occurs whenever two metals are connected electrically and an electrolyte is present. Common applications include piping protection and ship protection. 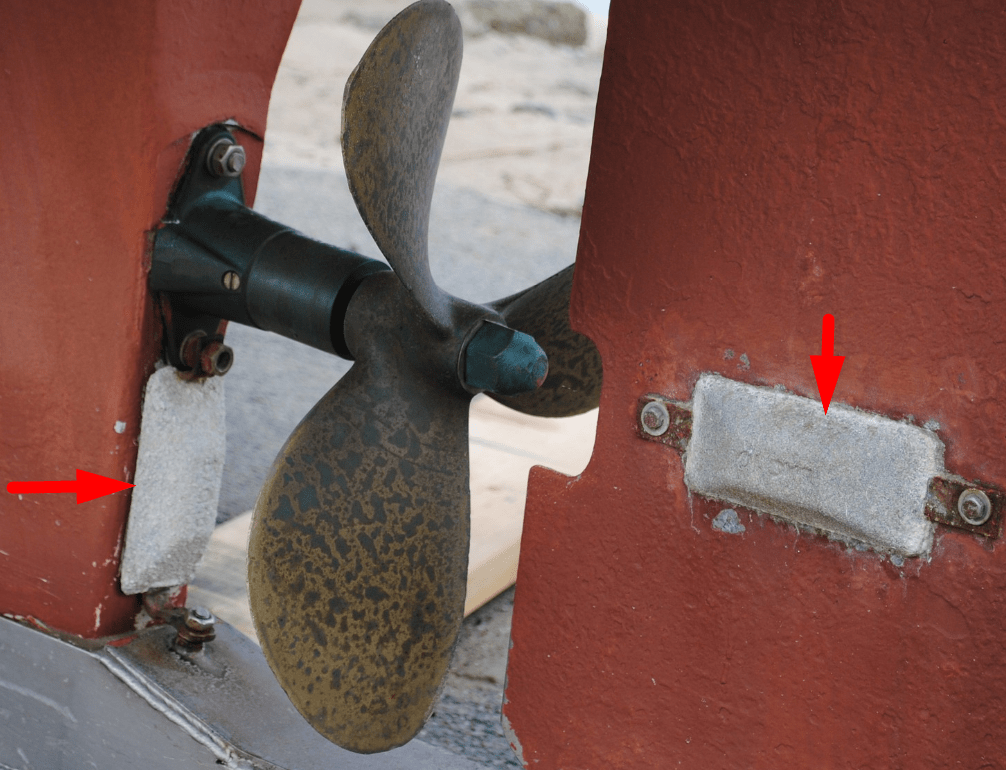 A drain valve can be found at the bottom of the heating tank; this will typically be a ball valve. The drain valve is used to drain water from the tank, for example, when maintenance needs to be conducted. As the valve is at the bottom of the tank, it can be used to remove any sediment e.g. scale, rust, bits of corroded anode etc. that have collected at the base of the tank. Removing sediment from the bottom of the tank is good practice and should occur periodically e.g. every 6 months. The process of removing sediment is often referred to as ‘flushing’ because the sediment is literally ‘flushed’ out of the system.

A dip tube may break and detach from the top of the heating tank, then fall to the bottom of the tank. Consequently, cold water will enter at the top of the heater tank instead of the bottom, and, if it doesn’t remain in the tank long enough to be heated, will be removed by the hot-water outlet for distribution to the building’s hot water taps. 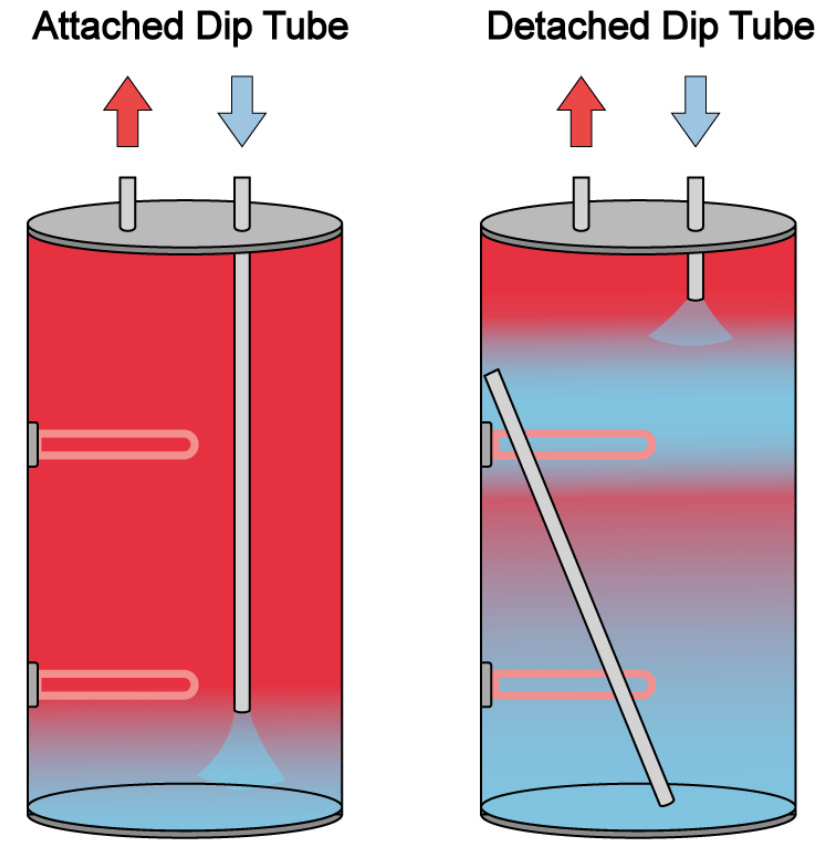 How To Replace A Broken Dip Tube

To replace a dip tube, the water heater should be electrically and hydraulically isolated (power off and water inlet and outlet valves closed). Hot water pumps drawing from the water heater should be turned-off. The water pressure within the tank should be relieved by opening the drain valve slowly. Once the pressure is relieved, close the drain valve and disconnect the cold-water inlet pipe so that the dip tube can be removed and replaced. After replacement, vent the air (bleed the air) and return the heater to service.

A heater’s sacrificial anode must be monitored, as it will corrode over time. The anode must be visually assessed periodically and replaced when little of the anode remains. Leaving an anode for too long between replacements may cause the steel rod in the middle to become exposed, which may be a sign that inadequate protection of metal surfaces within the heater is occurring. The image below shows a new anode compared to one that has been corroded/worn; the steel rod can be seen as a thin piece of cylindrical metal on the worn anode. 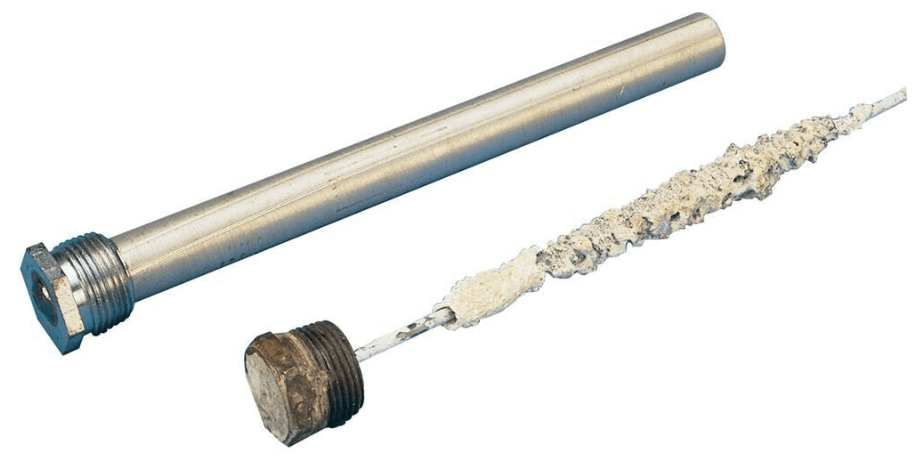 How To Replace The Water Heater Anode

To replace the anode, the heater must be hydraulically isolated by closing the inlet and outlet valves, so no water is going into or out of the heater. Hot water pumps drawing from the water heater should be turned-off prior to hydraulic isolation. The heating elements must be turned off, and pressure within the heater must be released via the drain. The anode cap at the top of the heater tank can then be loosened so that the anode can be lifted/retracted from the heater. Once the anode is removed, its body can be turned anti-clockwise to unscrew the steel rod from the cap, then a new anode can be installed, and the heater reassembled.

A build-up of calc (calcium carbonate) and other solidified minerals within the heater, is common in any appliance that uses water; these soluble minerals become separated from the water and solidify on surfaces within the appliance. Scale is another term used for solidified mineral deposits within a water system; scale consists of many minerals whereas calc refers to only calcium carbonate.

Scale and calc build up is especially problematic on a water heater’s heating elements. Scale acts as a thermal insulator, absorbing the heat being generated by the heating element(s), but transferring little of it to the surrounding water. This can lead to hot spots on the heating element where it is overheating whilst attempting to heat the water to the desired temperature. This inefficient use of electrical energy can not only lead to higher electricity bills, but can also cause heating elements to rupture and fail; the failed heating element must then be replaced.

Another component that is vulnerable to scale build up is the temperature/pressure relief valve. Should this occur, the valve operating mechanism can become stuck, consequently failing to open at the correct temperature or pressure. This can lead to very hot water in the tank, or to excess pressure being forced to escape the tank elsewhere in the water system, potentially damaging other components and piping joints. 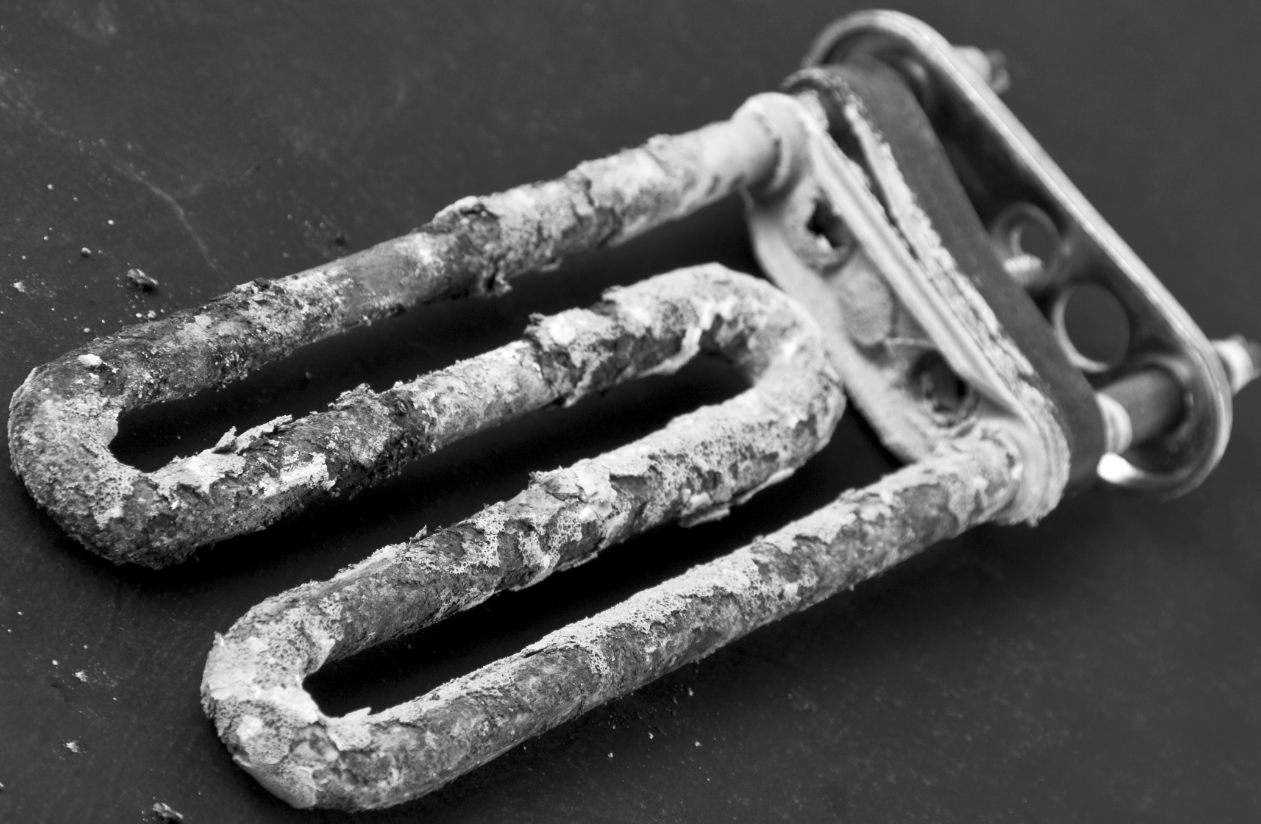