Natural draft cooling towers (natural convection cooling towers) use the principle of convective flow to provide air circulation. Natural draft towers are usually very tall in order to induce adequate air flow, they are also expensive to construct and are only used for applications where a large constant cooling requirement over many years is required; a thermal power plant is one such application. 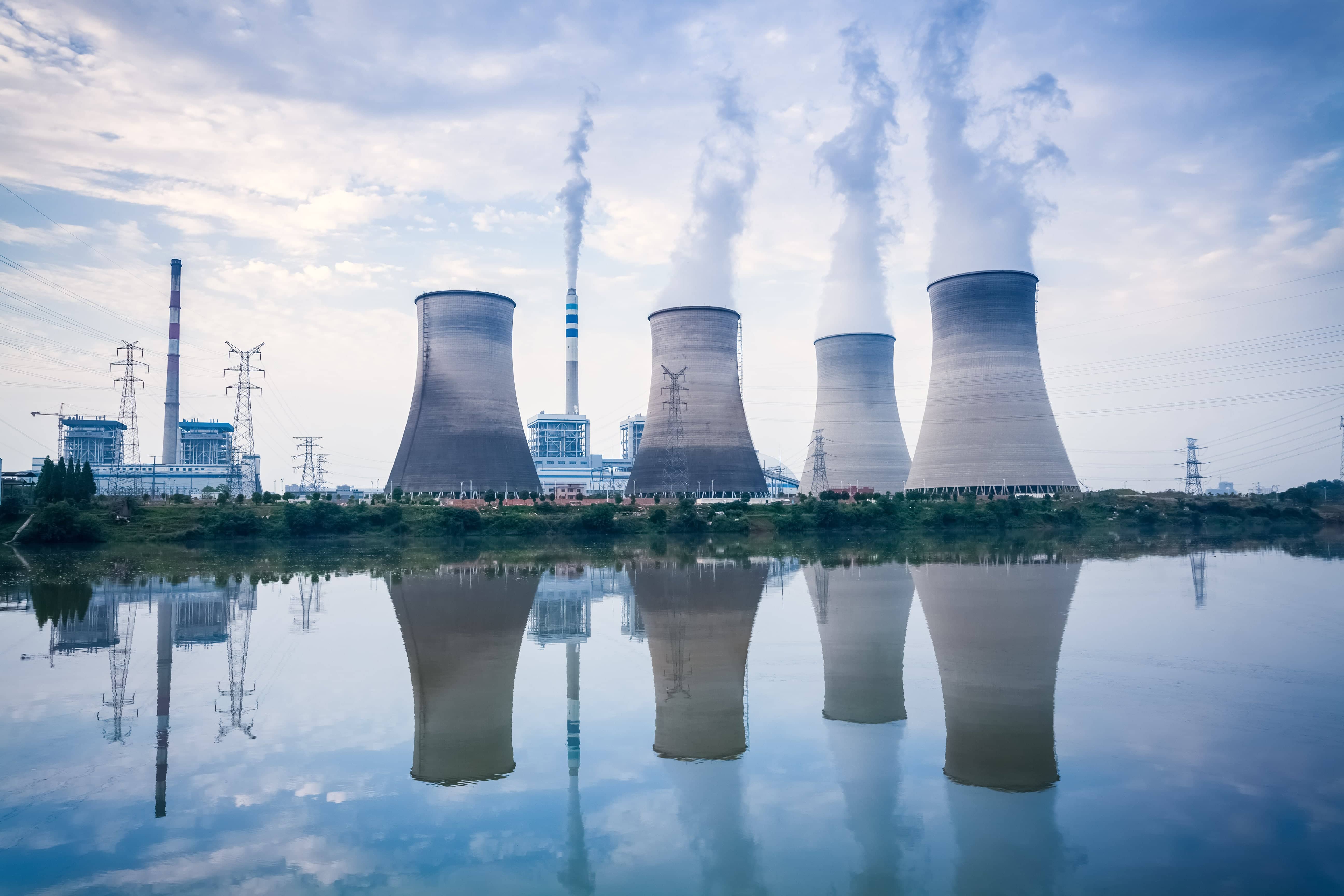 The below video is an extract from our Introduction to Cooling Towers Online Video Course. 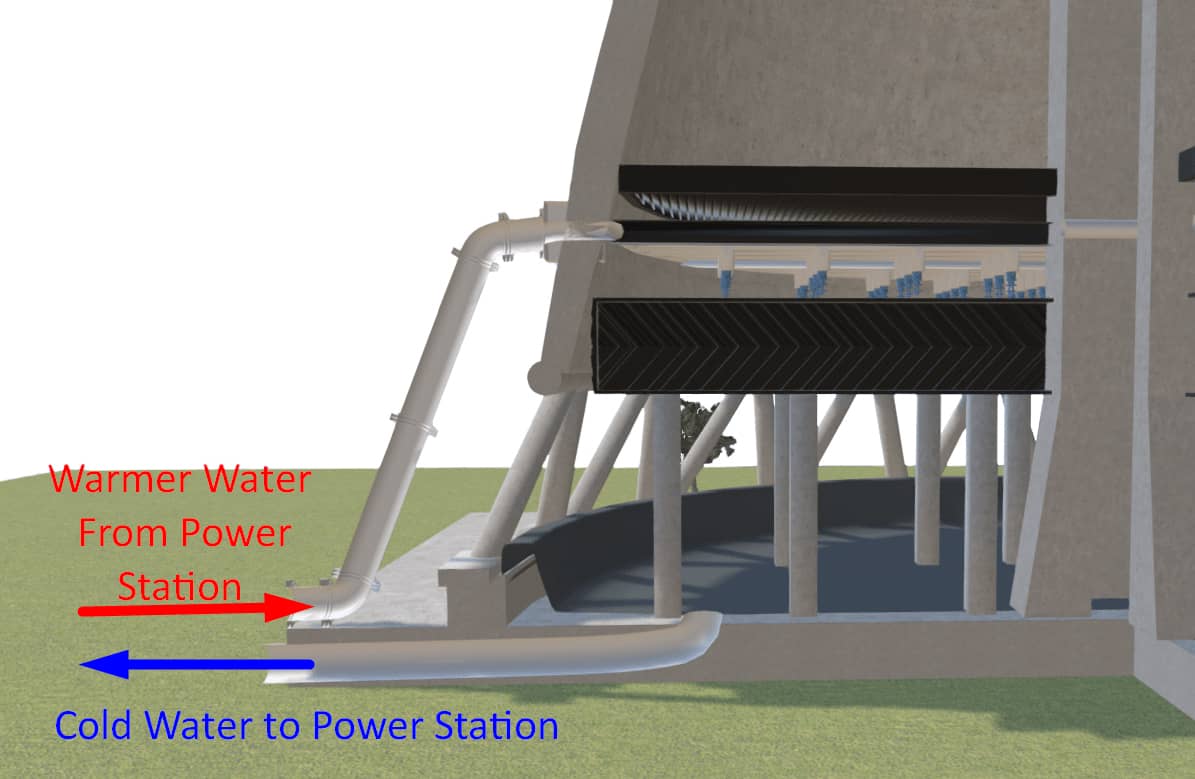 The incoming warm water is distributed through spray nozzles inside the tower. The spray nozzles spray the warm water evenly over the entire fill. Water passes downwards through the fill whilst air passes upwards. 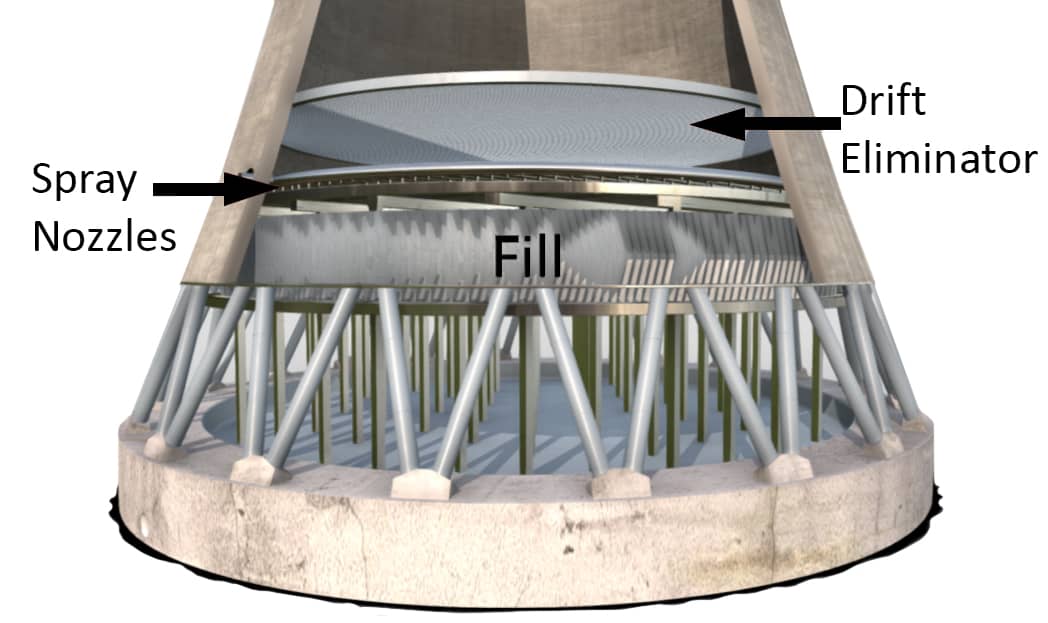 As the water travels downwards through the fill, some of it evaporates which causes the remaining water to be cooled (evaporative cooling). 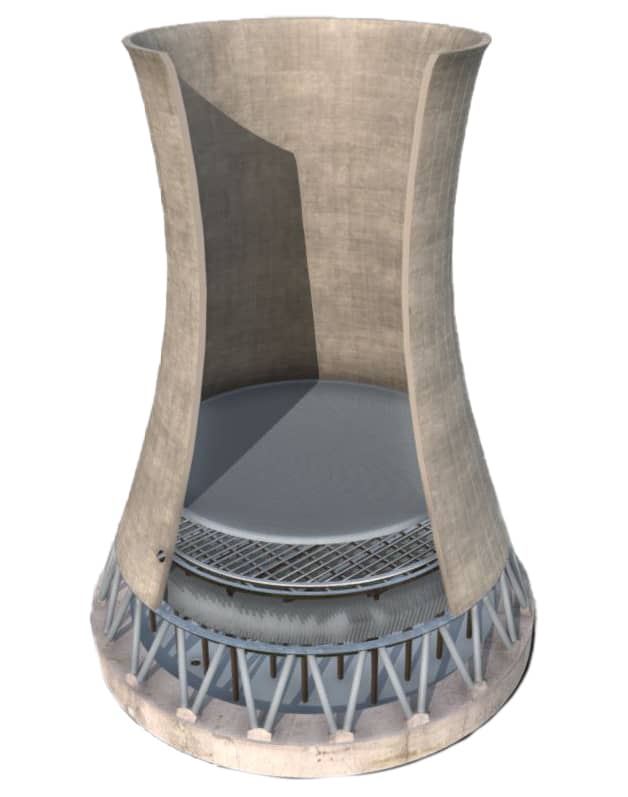 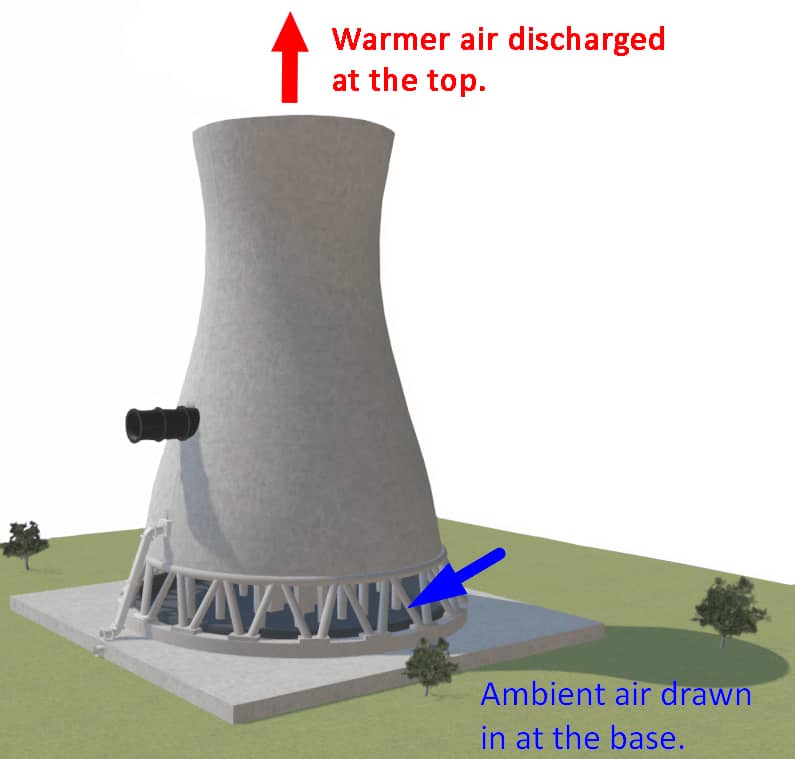 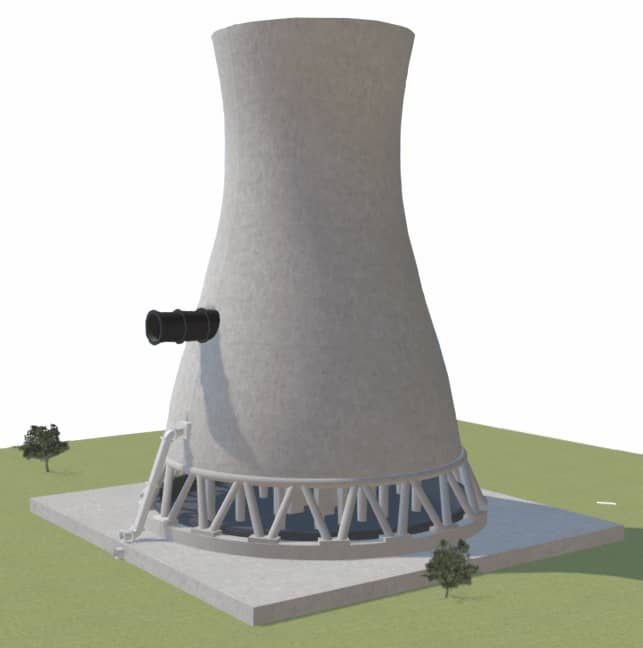 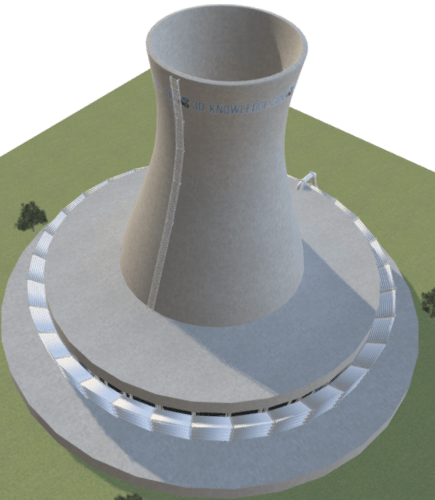 Natural draft cooling towers may operate in sub-zero environments which may lead to the reservoir water freezing. There are several methods employed to prevent this occurring.

Why do natural draft cooling towers have such a weird shape?

Natural draft cooling towers have a very unique shape for several reasons. The first reason is that the shape reduces the amount of construction material required when building such a large tower. The second reason is that the paraboloid shape of the tower accelerates the air flow through the tower, which increases the tower’s cooling capacity. Natural draft cooling towers are sometimes referred to as hyperbolic towers although the correct term is hyperboloid.

What is the stack effect?

When air is heated, it becomes less dense. Because warm air is less dense than cold air, it will rise above cold air due to the density difference. This process of warm and cold air separating based upon densities is known as the stack effect or chimney effect.

For example, a hot air balloon flies in the air due to the hot air that is contained within the balloon. The hot air is less dense than the surrounding ambient air, which is why the hot air rises, pulling the balloon up with it. 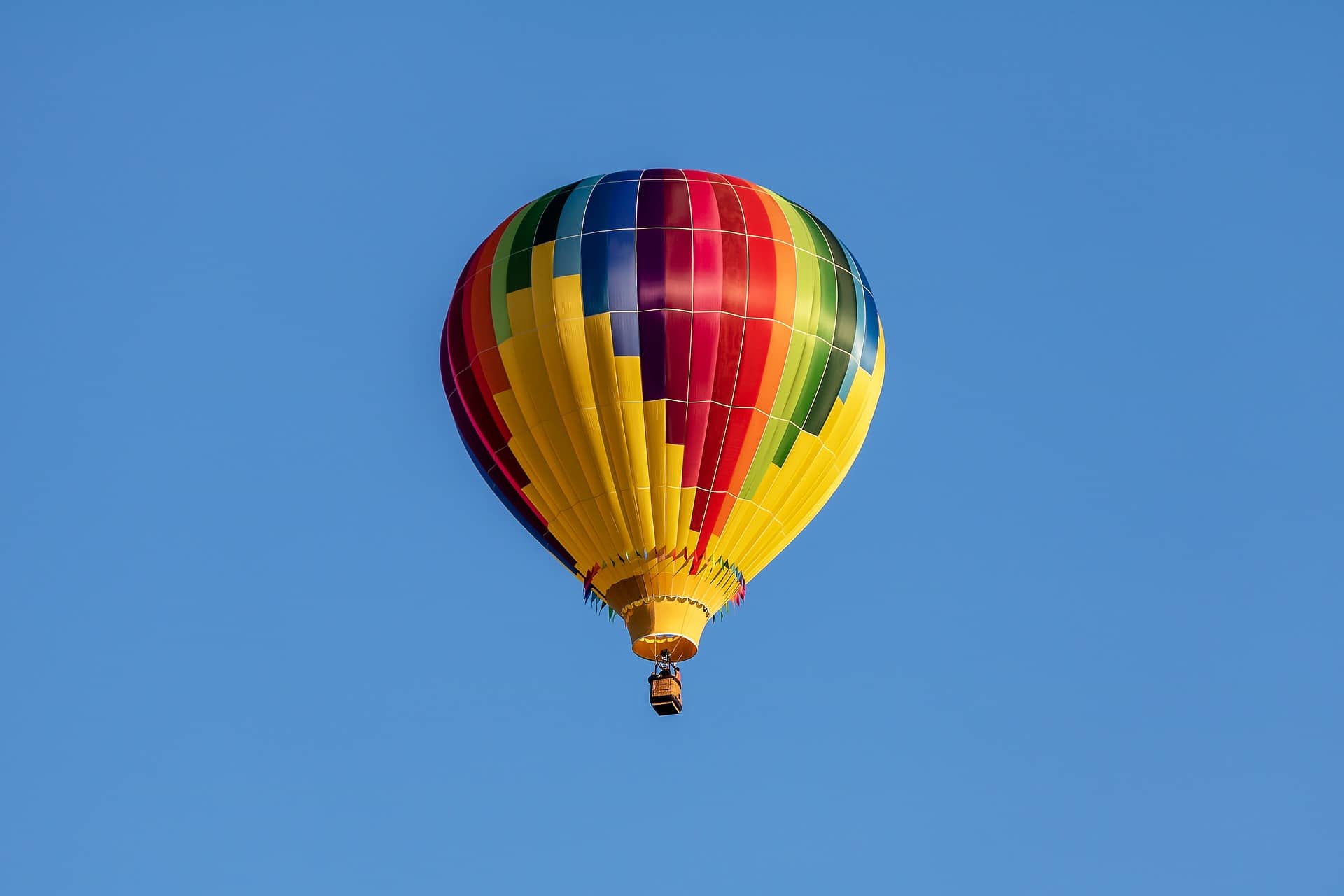 This 3D model shows all major components associated with a typical induced draft hyperboloid cooling tower, these include:

This is a 3D model of a Natural Draft Cooling Tower.

Natural draft cooling towers (natural convection cooling towers) use the principle of convective flow to provide air circulation. They are tall in order to induce adequate air flow. They are also expensive to construct, and are only used for applications where a large constant cooling requirement over many years is required; a thermal power plant is one such application.

The portion of a cooling tower that distributes water over the fill area usually consists of flanged inlets, flow control valves, spray branches, metering orifices, spray nozzles and other related components. The purpose of the distribution system is to ensure water is distributed evenly to all spray nozzles.

The sump (pump suction bay) is a depressed portion of the collecting basin from which ‘cold’ water is drawn to the centrifugal pump(s), then discharged to the process e.g. power plant. The sump usually contains strainers, anti-vortex devices and a drain or clean-out connection.

The fill is essentially a heat exchanger that maximises the contact surface area between the cooling water and air. Air passes upwards across the fill whilst water falls downwards due to gravity. As air passes over the water, some of the water evaporates, and the remaining water is cooled (evaporative cooling). Cooling towers use two main fill designs, the ‘film fill’ and ‘splash fill’ designs. Film fill is more efficient, but more expensive, and more prone to fouling.

‘Drift’ is the name given to water molecules that are lost from the cooling water system due to evaporation. A large plume of white moisture can often be seen rising from natural draft cooling towers, this is ‘drift’, and it represents a financial loss (lost water must be replaced). Drift eliminators reduce water losses and consequently reduce operational running costs.

Cooling water is drawn from the reservoir and sent to the steam turbine condenser(s) through this connection.

Cooling water returned from the condenser(s) enters through this connection.

As air passes through the fill, its temperature increases, and it rises up through the tower.

Ambient air is drawn into the tower through the tower base.