Careful attention is given to selecting the correct flange and gasket, whilst selection of the correct fasteners is often neglected. All elements of a flange assembly must be suitable if a leak free joint is to be obtained and maintained; bolts, studs, and nuts, are the fasteners that allow this to occur. This section deals with bolts, studs, screws, nuts, washers, bolting procedure, and their importance with relation to flanges.

Bolting criteria for a given flange is determined by the associated standard. For example, a flange of a certain size and class may have the following pre-defined factors:

Bolts have a cylindrical body with a screw thread at one end and a head at the other; bolts have non-tapered shanks. Bolts may be manufactured from various materials, but steel is the most common within the engineering industries. A bolt’s counterpart is the nut, which forms its female fastener. Other common types of fastener include the screw (set screw) and stud types. 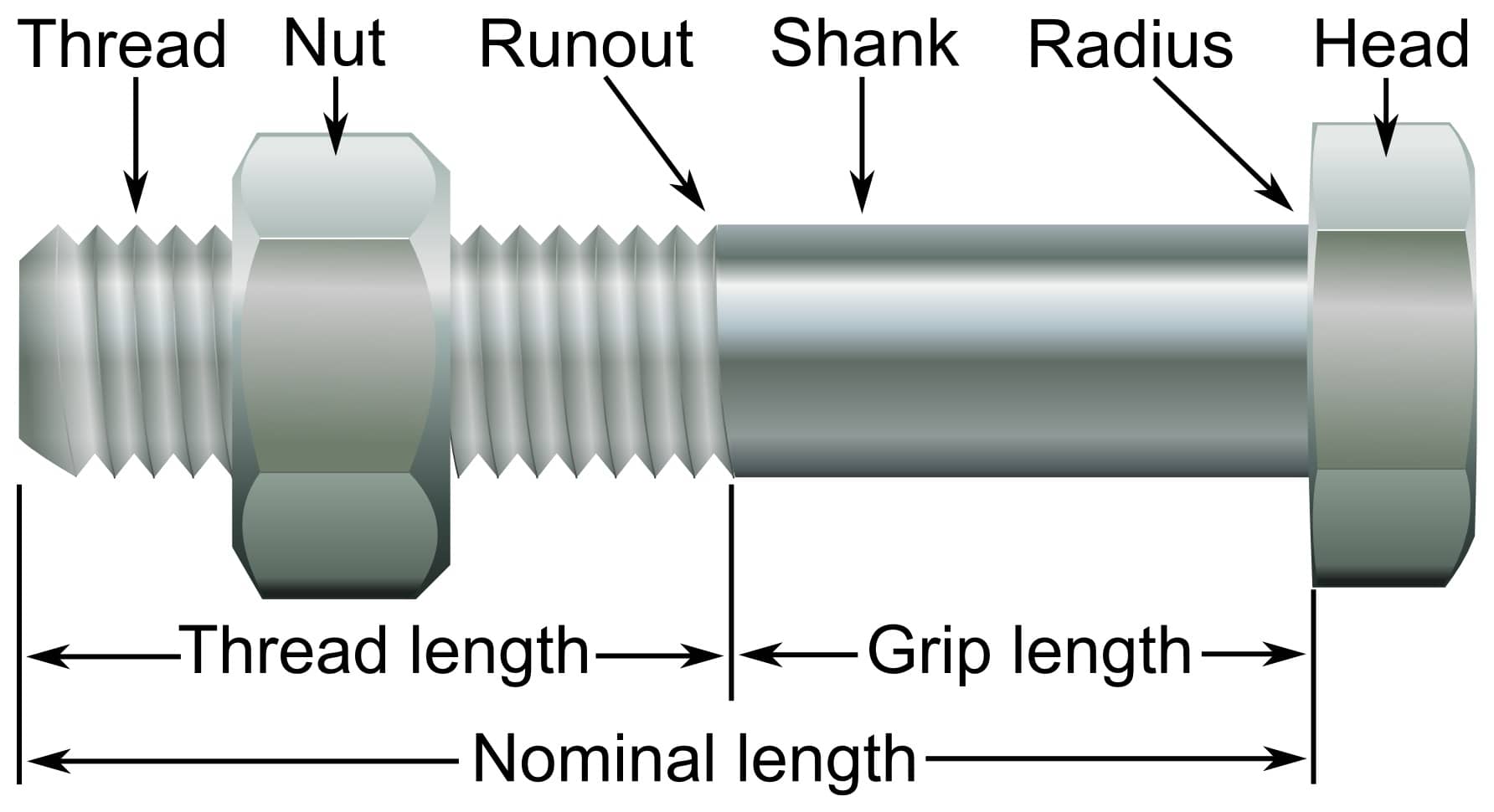 Bolts with six sided heads are used within the chemical, and oil and gas industries; these are referred to as Hex Bolts or 6-point bolts because of their hexagonal 6-sided shape. Using a 6-point spanner/wrench with a hex bolt reduces the likelihood of the bolt deforming when torque is applied (referred to as ‘rounding the bolt’).

Bolt heads can have more than 6 sides e.g. 12-point bolt, which allows a spanner to attach to the bolt head from more angles; this is useful when working in a confined area where access to the bolt is difficult. Increasing the number of contact points also increases the amount of torque that can be applied without rounding the bolt head. 12-point bolts are often used in the automotive industry, particularly for assembling combustion engines where bolts are difficult to access and must be tightened to a high torque.

Tip – the likelihood of rounding a bolt head increases as the difference between the bolt point number and spanner point number increases. Attaching a 12-point spanner to 6-point bolt will reduce the contact area between the spanner and bolt head. This increases the pressure acting on the corners of the bolt head (pressure = force / area) and thus increases the likelihood of the bolt head rounding. The exact same principle applies when connecting a spanner or socket to a nut. 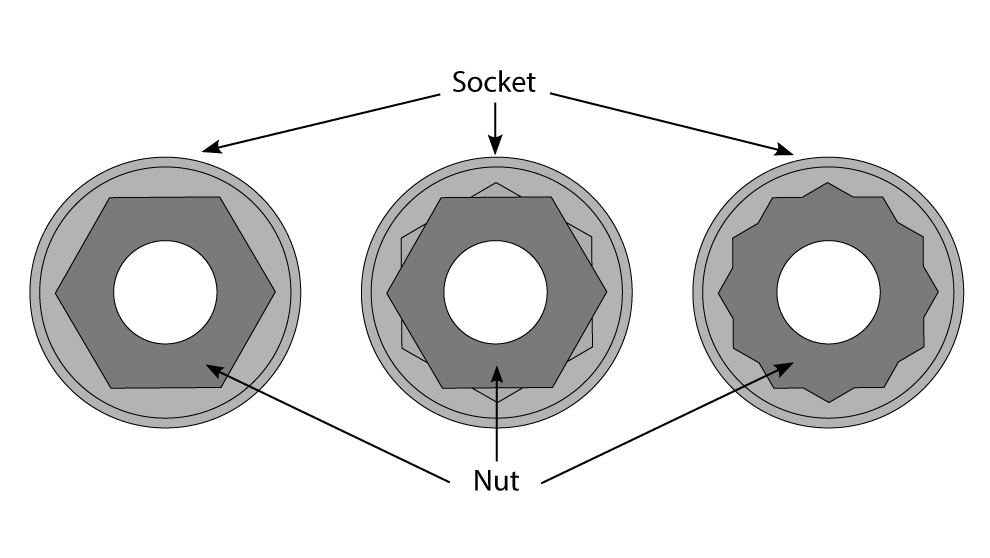 A screw type fastener is essentially a bolt, but it has a screw thread along its entire length; there is either no shank, or a tapered shank.

A stud type fastener has one or two screw threads and usually has a shank between the threads. The threads of a stud do not need to match i.e. they may have different geometry. When considering flanges, studs will have the same thread geometry at both ends and have two accompanying nuts; tightening of the nuts compresses the flange faces together, which forms a seal.

Nuts are the female part of a threaded assembly. Hex-nuts have a screw thread through their centre axis, are 6-sided, and have load and non-load bearing faces. The non-load bearing face has a 30⁰ chamfer and faces away from the flange blade. The load bearing face has no chamfer, faces towards the flange blade, and should be separated from the flange via a washer. Some nuts have a washer fabricated into their design and thus no additional washer is required. Materials for nuts are determined by associated standards; ASTM is one such provider of these standards. 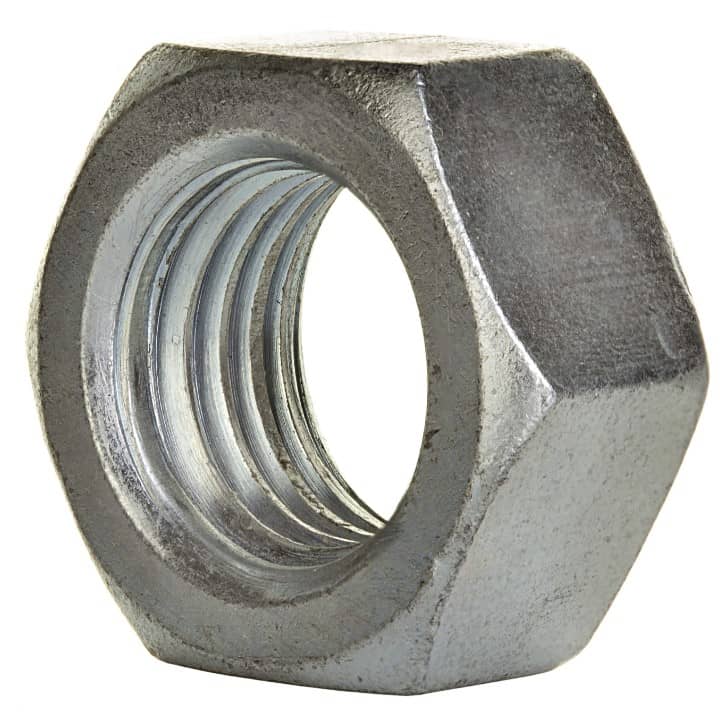 Tip – the male fastener should protrude through its associated nut by several threads when fully fastened. If the male fastener does not pass fully through the nut, it will be placed under more stress than intended and may fail. This poor practice during fastener assembly is known as ‘short bolting’, it is a common failure mode in many industrial plants.

Washers are disc shaped items with a hole bored through their centre axis; they are inserted between the fasteners and the component being fastened. There are three main groups of washer, these are the plain, spring, and lock types. From these three main groups come many other washer variations, although they usually have one of the following purposes, or a combination of them:

Washers can be -and are- used in combination with other washers, such as when placing a plain washer between a spring washer and the item being fastened. It’s also possible for a single washer to perform a dual function, such as when a plain washer is used for distributing the load of the fastener and electrically isolating the fastener from the item being fastened. Washers used for electrically isolating components are typically manufactured from polymer-based materials due to their insulating properties.

Of the three main washer groups discussed, plain washers are by far the most common type of washer.

For low pressure and low temperature applications, flanges are usually tightened by hand using a wrench/spanner. For higher pressures and temperatures, torque wrenches may be used. Torque wrenches allow personnel to tighten nuts to a specific torque, and thus ensure a certain sealing pressure is obtained; an alternative tool is a hydraulic tensioner (for studs). Irrespective of the tightening tool used, flanges should always be cross tightened during assembly.

Cross tightening of flanges ensures the flange is evenly loaded across its sealing faces. Uneven loading across the faces may lead to a skewed/slanted flange and/or a pinched gasket; either of these problems will increase the likelihood of the flange not sealing correctly.

The image above shows the order bolts should be tightened for three different flange sizes; the order is referred to as the ‘bolt tightening procedure’. 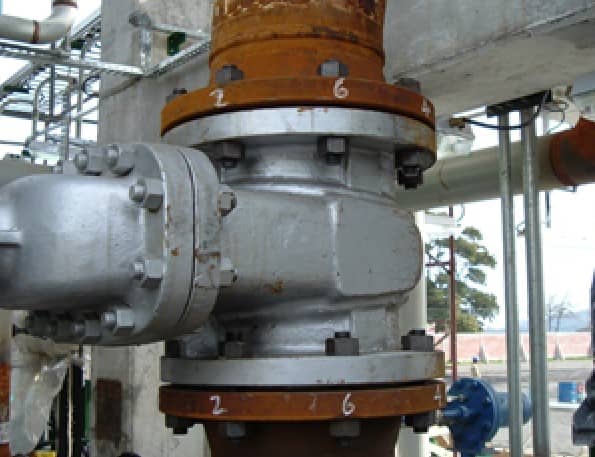 The correct alignment of flanges during installation is critical if a reliable seal is to be obtained. Misalignment of flanges causes uneven loading across the flange faces, which reduces the likelihood of obtaining and maintaining a seal. Misalignment also causes uneven loading across the flange fasteners, which increases the likelihood of the most highly stressed fastener failing.

Misalignment is classed as parallel or angular depending upon the direction of misalignment relative to the flange blades. Standards such as ASME PCC-1 give guidance concerning bolting assembly procedures and the checks involved to eliminate misalignment.