Deaerators are pressurised feedwater tanks also referred to as open feedwater heaters. Deaerators are critical components of many steam systems and have several functions: 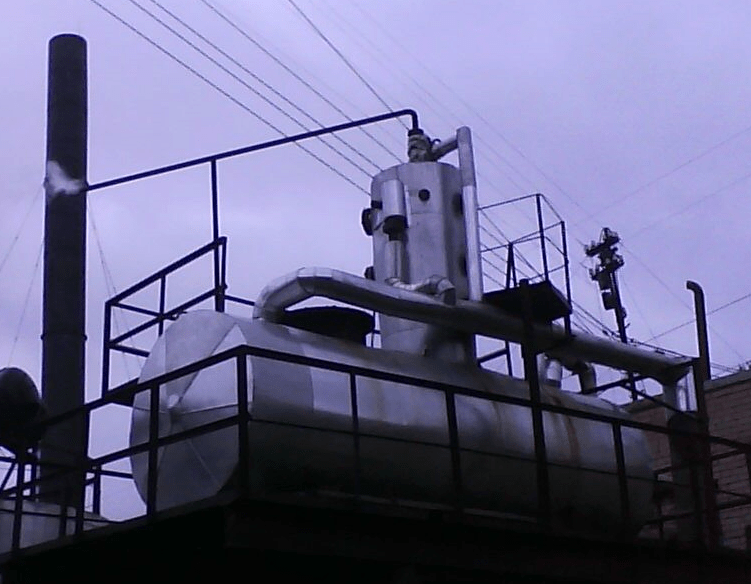 All medium to large steam systems require a deaerator to reduce the levels of dissolved oxygen (O2) and carbon dioxide (CO2) in the boiler feedwater, both of which will cause corrosion to boiler system components if not removed.

Deaerators achieve deaeration by raising the temperature of the feedwater, which reduces the solubility of the non-condensable gases i.e. the gases are released from the water. Once the dissolved gases have been released, the likelihood of corrosion is drastically reduced and the feedwater can be fed to the boiler.

A typical deaerator will remove almost all dissolved oxygen and CO2, with the remainder being removed by oxygen scavengers (sodium sulphite, hydrazine etc.) and CO2 scavengers (neutralising amines, bicarbonate etc.).

Most deaerators are designed to reduce dissolved oxygen levels to 0.05 cc/l (7 ppb), with oxygen scavengers removing the remainder.

Why remove oxygen and carbon dioxide?

Corrosion of boiler components exposed to water will occur if dissolved oxygen is present, or, the water pH is low.

Boilers and their ancillary systems are mostly constructed of carbon steel. As steel is iron based and oxygen reacts with iron to form red iron oxide (rust), the potential for corrosion is high. For this reason, it is imperative that the boiler feedwater dissolved oxygen content is as low as possible.

The amount of dissolved carbon dioxide in water dictates how acidic the water is. The greater the dissolved CO2 in the water, the lower the water’s pH i.e. the more acidic the water is. Low pH values will cause corrosion of boiler parts and consequently must be avoided. A typical boiler will operate with a pH value of between 8 to 11 (approx.), but this depends heavily upon the boiler system.

Corrosion can be classed as general, localised, or stress.

Boilers generate steam which is delivered to the process. Some of the steam transfers its energy to the process and condenses; the resultant water is termed condensate. Condensate is gathered throughout the steam system and is returned to a central storage tank, this is either an atmospheric feedwater tank, or a pressurised feedwater tank (deaerator). 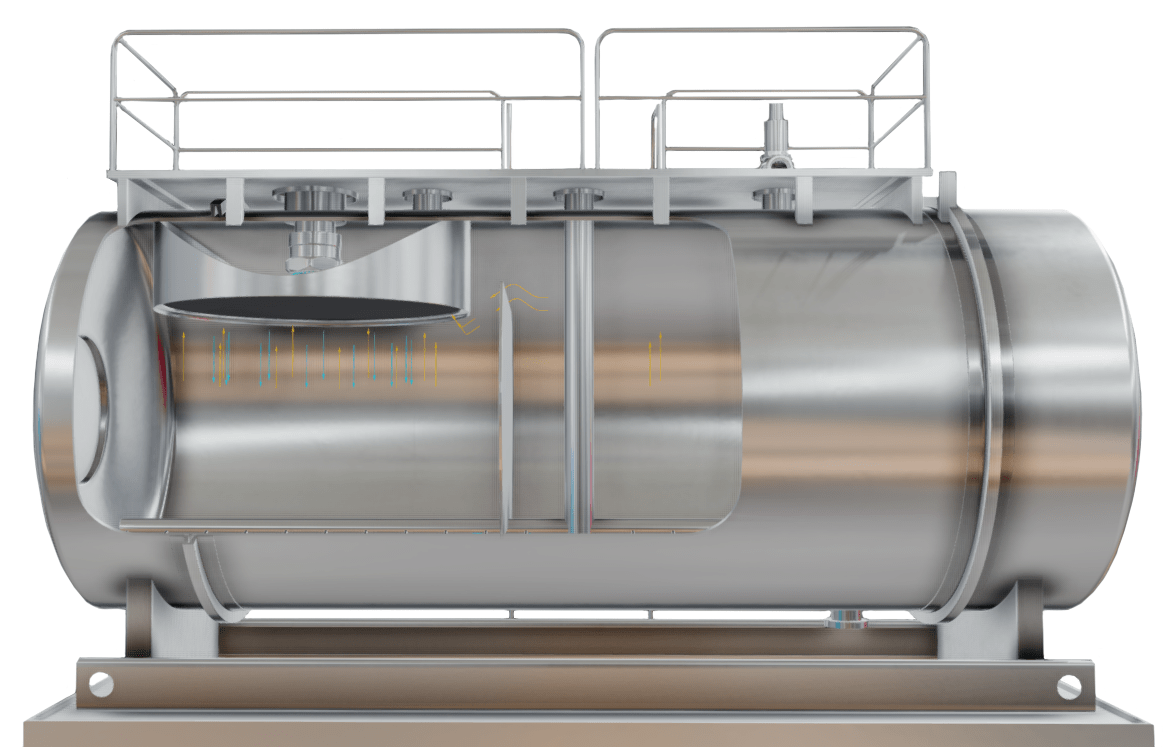 Makeup water replaces water losses within the system. Water losses may be an unavoidable part of the process e.g. steam cleaning of glass bottles in the edible food industry, or, may be due to leaks or evaporation losses etc.

The solubility of dissolved gases in water reduces as the temperature of the water increases. In order to raise the boiler feedwater temperature, low pressure steam is supplied. The steam transfers its heat to the feedwater until the feedwater approaches its saturation point (boiling point). As the water approaches its saturation point, the dissolved oxygen level approaches zero. In power plant, the steam supplied is often waste steam from the steam turbine(s). 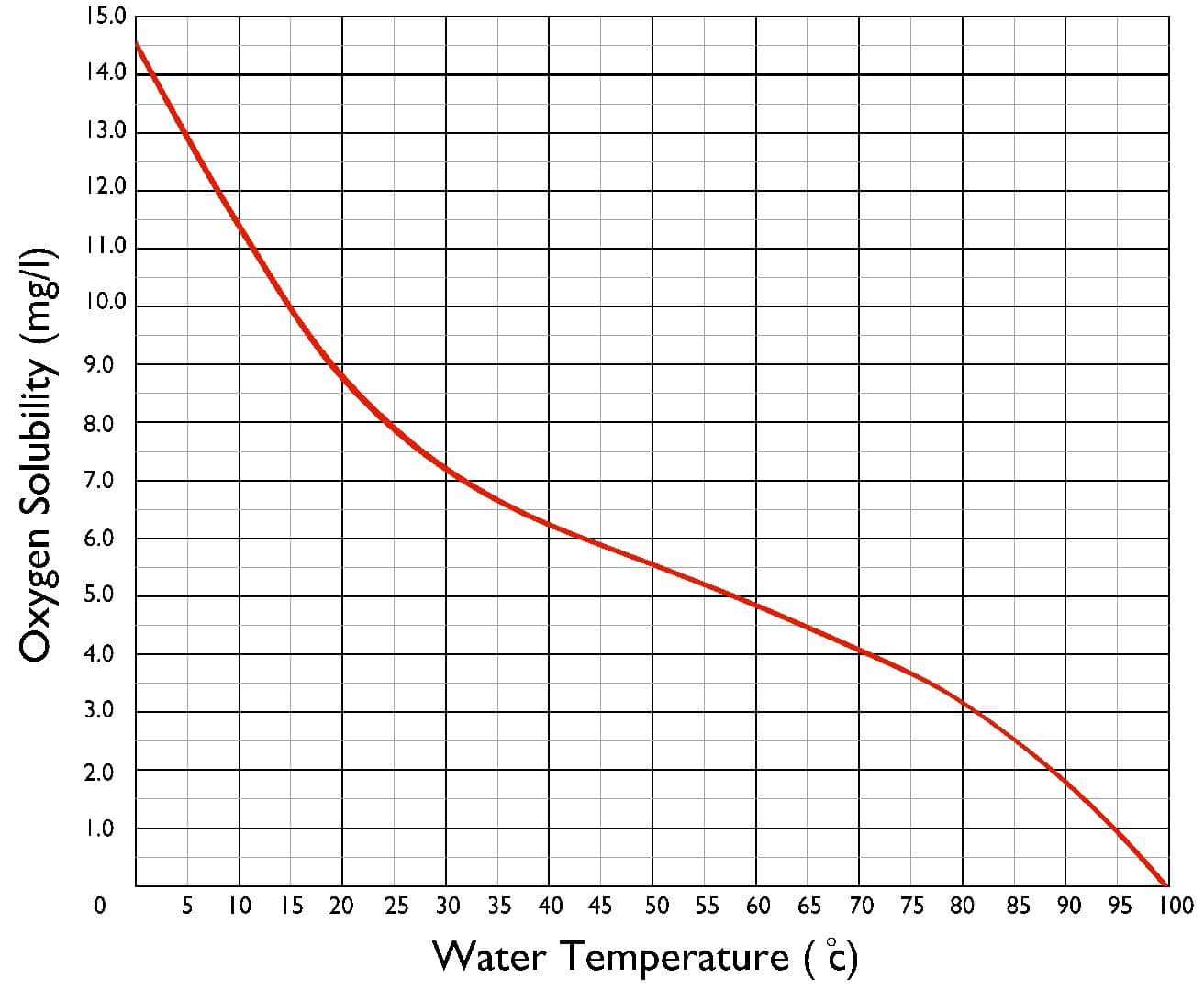 Dissolved gases released by the deaeration process are vented to atmosphere along with trace amounts of steam. A typical vent will use a plate with an orifice (hole) to control the rate at which gas is vented. If the orifice is too large, steam will be vented, which reduces the overall plant efficiency (because of the reduction in steam cycle efficiency) and drives up costs. If the orifice is too small, some gases may return to the feedwater, which is also undesirable.

Chemical dosing occurs on the makeup inlet line, within the deaerator, or between the deaerator and boiler. The chemicals needed, their quantity, and where dosing should occur, depend upon the system design. For example, makeup water supplied from a reverse osmosis (RO) plant will have a low pH and should be treated before it enters the deaerator.

A deaerator is an unfired pressure vessel. Deaerators are typically manufactured from carbon steel, although some industries -such as the pharmaceutical industry- use stainless steel. The pressure vessel is cylindrical in shape with as few welds and penetrations as possible. 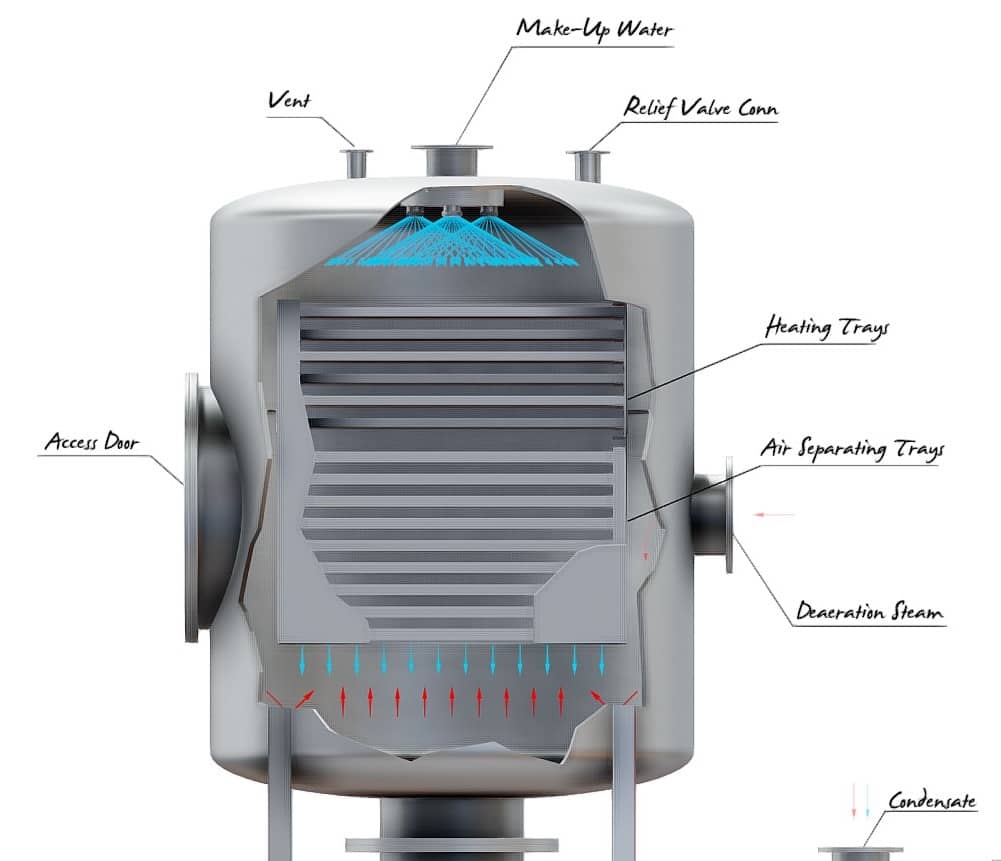 A pressurized deaerator will operate at approximately 5 psi at 230°F (imperial), or 0.4 bar at 105°C (metric). Deaerator feedwater will be maintained as close to the saturation temperature as possible in order to reduce the level of dissolved gases as much as possible, but without the water changing phase to steam. If the feedwater exceeds its saturation temperature, it will begin to form steam and will either condense, or be vented to atmosphere, both of which are not desired.

The below video is an extract from our Introduction to Steam, Boilers and Thermodynamics Online Video Course.

There are two common deaerator designs, spray and tray (spray-tray). Each design has its own operating characteristics. Regardless of the design employed, both deaerators designs:

Water enters the deaerator and fills the water box. The water box is a temporary holding area that ensures water is fed evenly through a series of spray nozzles, then into the deaerator.

Each spray nozzle acts as a non-return valve and will close if the water box has insufficient water pressure. To ensure long life, spray nozzles, the surrounding spray area and the trays, are all constructed of stainless steel. 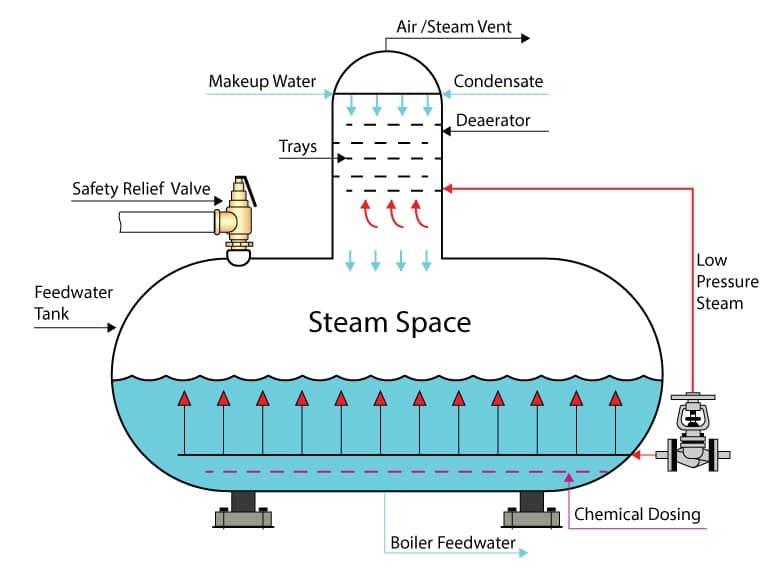 Once the water has passed through the spray nozzles, it comes into direct contact with the steam. The steam flows in a counter direction to the water. As the steam heats the water, the dissolved gases are liberated. The quantity of dissolved gases present reduces as the water cascades down through each successive tray. The upper trays are referred to as heating trays, or first stage trays. The lower trays are referred to as deaeration trays, or second stage trays. The water then exits the tray area and is discharged to the feedwater tank.

Dissolved gases and some steam are constantly discharged through the vent. A typical deaerator will vent between 5% to 15% of the steam that passes through the deaerator. As steam costs money to generate, it is beneficial to vent as little steam as possible.

Approximately 90% to 95% of deaeration occurs within the spray area with much of the remainder occurring in the tray area. Mechanically deaerated water is usually designed to lower the oxygen content to 7 parts per billion (ppb). Any remaining oxygen in the feedwater is stripped using oxygen scavenging chemicals (sodium sulphite, hydrazine etc.). 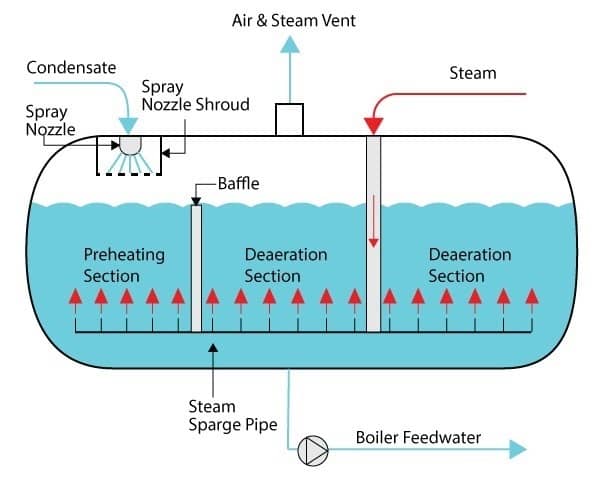 Water exits the nozzles and passes through a large perforated circular tray before joining the water in the feedwater tank. A submerged steam sparge/sparger pipe distributes steam to the preheating and deaeration sections of the deaerator. The steam heats the water to within 2°C (approx. 4°F) of its saturation temperature to ensure as many condensable gases are liberated from the water as possible.

The heated water then passes around a baffle plate to reach the deaeration section, and is discharged as heated, deaerated, feedwater.

Spray scrubbers function in a similar manner to spray deaerators, but they have a scrubber installed. Water enters a water box, is sprayed through spray nozzles, then drains through a tray and is directed to a scrubber.

Scrubbers utilise steam to agitate (using steam bubbles) and heat water after it leaves the spray area of the deaerator. Close contact with the steam ensures good heat transfer and rapid liberation of dissolved gases. The deaerated water then collects in the feedwater tank and is ready for use as boiler feedwater. 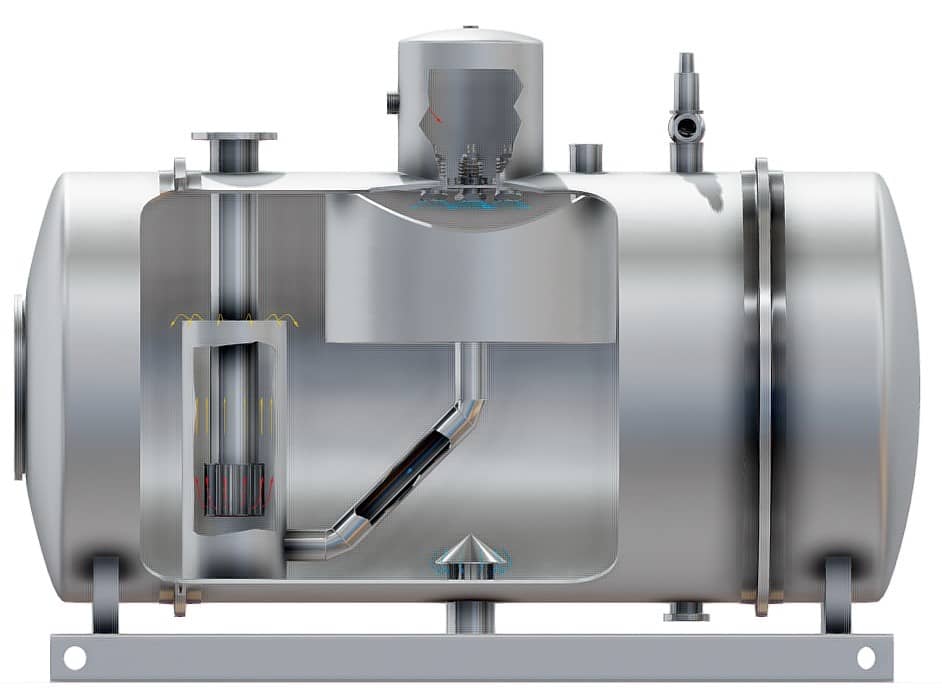 The type of deaerator chosen for a steam system is heavily dependent upon the system. Some systems are effectively closed-loop systems which require very low amounts of makeup water (1-3%); other systems require large amounts of makeup water. The temperature of the returned condensate is also a factor that must be accounted for.

A paper pulp plant steam system has the following characteristics:

Condensate within a closed system may pass through spray nozzles as it enters the deaerator, or it may not. If the condensate is close to its saturation point, then it may be delivered directly to the feedwater tank rather than through the deaerator.

Makeup water is almost always passed through spray nozzles as it enters the deaerator, this is to reduce the risk of thermal shocking and to ensure that all dissolved gases are removed upon entry into the system.

Feedwater tanks connected to deaerators provide a stored amount of treated boiler feedwater that can be used to cope with fluctuations in steam demand. A typical boiler feedwater tank will hold enough water to feed a fully loaded steam system (boiler or boilers) for approximately 10 to 15 minutes. For critical systems, the reserve is increased and/or an additional deaerator will often be installed. Building redundancy into the system is referred to as:

Where n is the quantity of machinery or equipment required for safe operation of the plant and the number indicates the quantity of the reserve. Nuclear power plants often operate with n+2 on all critical plant equipment.

Boiler feedwater pumps are installed directly after the boiler feedwater tank. These types of pump are often centrifugal, or multistage centrifugal in design. Centrifugal pumps are not usually self-priming and cannot pump gases, it is therefore imperative that the feedwater supplied does not change state/phase to steam. 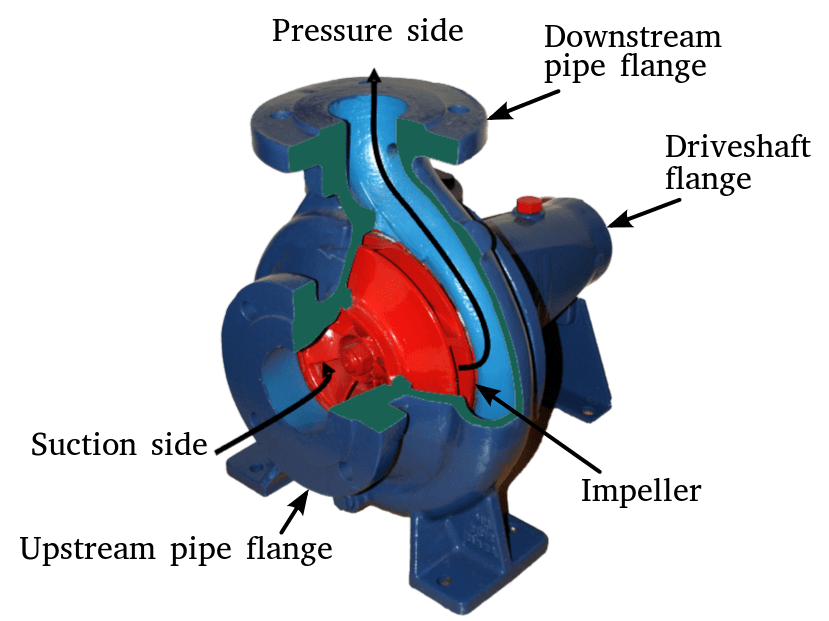 Feedwater is stored at a temperature close to its saturation point to ensure very low amounts of dissolved gas are present. If the system pressure reduces, the water may turn to steam, and this would cause the pumps downstream of the tank to lose suction (in extreme cases). For this reason, feedwater tanks (and deaerators) are installed at a higher elevation in the plant than the pumps. As water leaves the feedwater tank, its pressure increases and the risk of the water changing state reduces.

Aside from the risk of losing suction, steam bubbles within the water may form and collapse as they pass through the pump impeller. The forming and collapsing occurs due to the difference in suction and discharge pressure. Whilst this condition is relatively harmless in small amounts, it becomes a problem if the frequency increases i.e. thousands of times per second. As the vapour bubbles collapse, they cause damage to the surrounding metal surfaces and gradually erode the parts. Over time, an impeller can literally be ‘eaten’ away. This phenomenon is known as cavitation.

If a pump is suffering cavitation, it is easily identifiable because it will sound as if marbles are passing through the pump. See the Introduction to Centrifugal Pumps course, or associated handbooks if you would like to learn more.

Maintenance tasks associated with deaerators vary depending upon design, but some common tasks should be performed on all deaerators:

In addition to the maintenance tasks mentioned above, additional more frequent tasks should include: